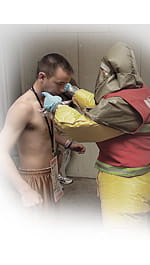 As the only academic medical center in western Pennsylvania, UPMC shares with the federal, state, and local governments the responsibility for the health and safety of the community, including crisis preparedness.

Recognizing the vulnerability of a community in the face of either a man-made or natural disaster, UPMC has developed an array of resources to respond to all manner of crises. In addition to pledging necessary community support during and after emergencies, UPMC has developed specific tactics to help equip families and individuals prior to need.

Following the terrorist attacks of Sept. 11, 2001, UPMC partnered with the University of Pittsburgh to launch the UPMC Center for Health Security of UPMC.

The Center works to affect policy and practice in ways that lessen the illness, death, and civil disruption that would follow large-scale epidemics, whether they occur naturally or result from the use of a biological weapon.

Experts at the Center publish research findings regularly and have been consulted by government agencies, businesses, academia, and the media for independent analyses of issues pertaining to national and global epidemic preparedness and response.