As a 6’2” athlete, Karen Maynard stayed healthy and fit into her early 20s, playing basketball and running track and cross country. All that stopped when she entered graduate school.

“I quit sports but never adjusted my diet to my new lifestyle,” says Karen, now 44. “Instead, I became a stress eater as my classes got harder. In just one summer, I packed on 20 pounds. After that, my weight just kept increasing.”

In 2014, she contacted the UPMC Central PA Weight Management Center in Harrisburg.

“At the time, I was considered obese, but not morbidly obese,” says Karen, a wife and mom who works for a state agency. “I went through their medical weight loss program and soon lost 40 pounds.”

Around the same time, Karen was diagnosed with Graves’ disease, a serious immune system disorder that often leads to an overactive thyroid and an accelerated heart rate. “That helped explain why I was losing so much weight so quickly,” she says. “My attention shifted from losing weight to just staying alive and healthy.”

When medicines failed to control the disorder after two years of treatment, doctors completed a thyroid ablation to eliminate Karen’s thyroid in 2017. “But without my thyroid, my weight really started to creep up and up,” she says.

In January 2020, Karen’s younger sister had a heart attack. “She was healthier than me, and thankfully survived,” says Karen. “But that was a real eye-opener. And the stresses of COVID only contributed to my stress eating. That summer, I reconnected with the UPMC Weight Management Center. I weighed 320 pounds with a body weight index (BMI) of 41.1. I was morbidly obese.”

Opting for a surgical solution

After consulting with specialists at the center, Karen decided to have a gastric sleeve surgery, a bariatric procedure in which part of the stomach is removed to create a tube-shaped stomach or sleeve. For several months, she worked with a nutritionist to lose weight and prepare for surgery. The day before Thanksgiving 2020, she was operated on by Justin Rosenberger, DO, at UPMC Community Osteopathic in Harrisburg.

“Dr. Rosenberger and everyone at the hospital and Center were terrific,” says Karen. “There were challenges but they supported me every step of the way.”

Post-surgery, Karen’s weight loss has continued through diet and exercise. “For years I struggled with arthritic knees, but after losing so much weight, I discovered they didn’t hurt so much,” she says. “I started doing some light walking in March 2021, then added a little jogging.”

“Then my athletic drive kicked in and I began signing up for 10K races,” she says. “I’ll never be a super-fast runner with my knees, but my endurance keeps improving and I’m finishing all my races.”

In April 2022, Karen completed a half-marathon at the Gettysburg Festival of Races — and will compete in her first marathon in November when she runs the Harrisburg Marathon.

Karen and her dad began to hike a 230-mile section of the Pennsylvania Appalachian Trail and plan to complete the hike in September 20222. “We hike about 15 miles each trip over multiple weekends,” says Karen. “It was terrific experience to spend so much time together.” 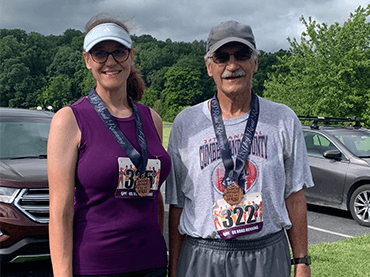 “Before my surgery, I experienced pretty bad anxiety and depression,” says Karen. “That’s all in the past. If I feel anxious, I go for a run. I make running a daily priority — it’s on my calendar.”

Karen’s severe sleep apnea also disappeared. “Before surgery, I’d stop breathing 34 times an hour without my CPAP machine,” she says. “When I went to the doctor to say I didn’t need the machine any longer, she ordered two sleep studies to confirm it was true. She was amazed — and I ditched the machine.”

Karen now weighs 185 pounds and wears a size 14. She remains an active member of the UPMC Weight Loss Management Center’s support group. “We meet at UPMC Community Osteopathic and discuss the challenges and successes of our respective journeys,” she says.

Her advice to anyone considering bariatric surgery? “Your life will change and you have to be willing to accept that fact,” says Karen. “When I meet friends for dinner, I ask for a to-go box before I even begin eating. That way I’m not temped to overeat. Our family gatherings are now built around things like game nights, rather than meals.

“So much of my success is due to the incredible support I’ve received from my family, work colleagues, and friends,” she adds. “Having that kind of support is key for anyone starting this journey.”