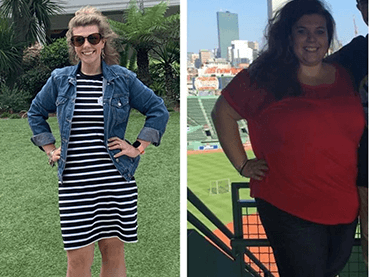 Lindsay Smith, CST, is a 29-year-old Harrisburg, Pa. resident and UPMC Harrisburg employee. She is married and has a 16-month-old daughter and a dog. She is healthy and active. But she has had to overcome some major obstacles to get to where she is today.

According to Lindsay, “weight was always a thing.”

Lindsay says she developed some of her bad food habits early in life.

“Looking back, you know, I had family members that were overweight. I was often surrounded by bad habits, like overeating, eating late, snacking a lot, and limited exercise,” says Lindsay.

“[My weight] fluctuated a lot as a kid. I played field hockey, but I could never lose weight, it just wasn’t in the cards for me. I had a very large friend group growing up, but I was always the ’big friend.’ It was always a problem.”

The pressure at school was coupled with others’ simplified misconceptions that “if you just ran five miles and ate salad, you’d lose weight.”

Lindsay tried several diets in high school alongside her mom. But like many who struggle with dieting, when Lindsay went off the diet, she says she would gain back the weight she had lost, and then some.

And then as she transitioned to life as a college student, she says that a combination of stress and continued poor habits led to her gaining the “Freshman 15.”

At 21 years old, Lindsay’s physician told her if she didn’t lose weight, she likely wouldn’t be able to have kids, something she knew she always wanted for herself.

A Breaking Point and a Decision to Change

By the time she was 22 in 2016, Lindsay was borderline diabetic. She had numerous knee dislocations and was very achy. There were concerns that if she stayed in her role at her job where she was on her feet a lot, she would need knee replacements by the time she was 30.

Her ultimate breaking point came that year on a trip to an amusement park with her family.

“I was standing in line for a ride, and I remember the girl in front of me was a little bigger than me, and I watched as she walked up and realized she did not fit on the ride. And I knew that if she didn’t fit, there was no way I was going to. Sure enough, I didn’t. That was a big wake up call,” says Lindsay.

At that point, Lindsay decided enough was enough and signed up for an information session at the UPMC Central PA Weight Management Center.

Lindsay knew about the Center from her mother who, a few years prior, had had a successful bariatric surgery herself. Her mother is also a bariatric coordinator, so Lindsay had a good amount of knowledge about weight loss surgery before ever reaching out to inquire for herself.

Within two weeks of that info session, Lindsay had an appointment to meet with a doctor to discuss her options. At her doctor’s recommendation, Lindsay decided that gastric sleeve surgery would be the best fit for her.

In 2017, at 23-years-old and weighing around 268 pounds, Lindsay underwent her surgery with no major complications. Justin Rosenberger, DO, performed the surgery.

“The Center has support groups and different things to help you along the way,” said Lindsay. “I still go to all my appointments there and have bloodwork done yearly. They know my health and history. I feel comfortable there. And you’re always considered a bariatric patient, it never goes away. It’s a lifelong process.”

Lindsay even reached out when she found out she was pregnant a few years after her surgery to ask about resources specific to pregnancy after weight loss surgery. “I learned that, for me, even though I had the gastric sleeve, I didn’t need to eat more to have a healthy pregnancy. And since having my daughter, there have been times when I have sought out support. Sometimes you need that extra help and that’s OK. You have the resources. That’s what they’re there for.”

Lindsay has also found social media to be particularly helpful.

At her lowest post-surgery, Lindsay weighed in at 130 pounds – losing over half of her starting weight.

A New Lease on Life 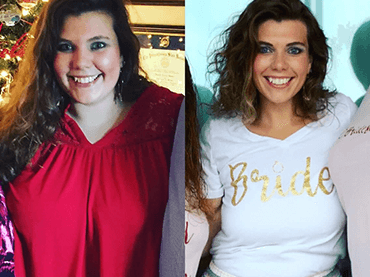 On Dec. 13, 2022, Lindsay celebrated her five year “surgiversary” – or five-year mark since her weight loss surgery.

Since her surgery Lindsay has had a healthy pregnancy and has maintained her weight at about 145 pounds.

“The biggest reason I do this is for my daughter and my family. If it wasn’t for Dr. Rosenberger, I wouldn’t be doing all the things that I am today. I really believe that. It’s the best decision I could have made,” said Lindsay.

“There’s no way I would have be able to care for [my daughter] sufficiently if I was almost 300 pounds again. I wouldn’t be able to play with her on the floor, take her to the park, go on vacations. At our beach trip this year, I had to go up 30 stairs to the sand dune and beach. I kept thinking that I would have been struggling and miserable at my previous weight. I would have made excuses not to go to the beach at all. But I’m not making excuses anymore. I’m getting out there and doing what I want to do.”

Lindsay also recognizes the positive impact her weight loss had on her pregnancy journey.

“I was healthier because of it, I didn’t have a lot of issues getting around, and I successfully breastfed,” she says.

Lindsay acknowledged that in addition to a physical journey, it’s a mental one too. And she has made great strides in that area as well.

“I realized that I have a food addiction. It’s something that I deal with every single day. But now I’m focused on maintaining my health. Now, I can enjoy occasional slice of pizza. I might snack a little too much one day. But what I have now is the ability to know when not to do that or when it’s been too much. Especially with holidays coming up. The habits that are everyone’s healthy New Year’s resolutions – those are year-round for me.”

Lindsay has also focused on recognizing the habits that were passed down to her and breaking the chain with her daughter.

“There’s a lot about weight loss that is environmental or hereditary. But I’m trying to break down some of the generational aspects that have been passed down over and over. Instead of handing my daughter cookies, I try to introduce her to different fruits and vegetables. Instead of insisting on her cleaning her plate, when she’s done, she’s done.”

Lindsay’s Advice for Others Considering Surgery

When it comes to considering bariatric surgery, Lindsay is quick to reinforce that surgery is not a quick fix.

Lindsay says she thrives on routine. She found routines that worked for her to reach her goals and encourages others to find their own.

“There are things that have stuck with me, like I drink a protein drink every morning. Meal prepping and meal planning has helped me a lot. Look for recipes and things that might work for you and your family’s schedules. Try different things too. My taste buds have changed. I used to dislike brussels sprouts, now I love them.”

She adds that you can find lots of interesting healthy options nowadays to add some variety to your meals.

“You know the ‘cauliflower craze’ we have now where you can find cauliflower crust pizzas and whatnot? We didn’t even have that five years ago when I was starting my journey. Lots of things have evolved and there are lots of good options. There are cool protein companies out there with yummy flavors like birthday cake and cookies and cream. Healthy choices don’t have to be boring!”

Ultimately, Lindsay says, it won’t all be easy, but you have to stay consistent.

“Some of the things you experience immediately post-op, they might stink,” she says. “But you just have to tell yourself ‘It won’t be like this forever.’ And it won’t. Before you know it, you’re a year out, five years out. You just have to adapt. It’s a lifestyle change. It’s not the ‘easy way out.’ You really have to be willing to put in the work.”