The Challenge: A Tumor on the Acoustic Nerve

Eddie didn’t know he was having symptoms of a brain tumor. In fact, it was only by chance that he found out about it at all. His primary care doctor found the tumor in August 2015 when he ordered an MRI for an unrelated problem. As time went on, Eddie realized he’d been suffering the brain tumor’s effects for quite a while.

Eddie’s tumor was an acoustic neuroma. This non-cancerous tumor on the nerve leading from the brain stem to the ear affects hearing and balance. As a result, Edward had loud tinnitus, or ringing, in his ear for a year prior to his diagnosis, and he had trouble walking in a straight line. He sometimes felt unbalanced and got dizzy easily, though it never lasted long.

​​“I never really thought there was anything wrong other than the fact that I was just getting a little older,” Eddie says.

The Path to Brain Tumor Treatment at UPMC

Eddie began visiting neurosurgeons in California — his home state — and quickly learned two things. The first was that the tumor wasn't life threatening and he could choose not to act. However, it would continue to grow and could eventually reach his brain stem. The second was that surgery came with serious risks.

The surgeons Eddie met with told him hearing loss in his right ear was a near-certainty. They also told him there was a possibility of facial paralysis. Surgery would also mean a recovery period of at least a month. With two young children and a career in face-to-face sales, the risks would have seriously impeded his lifestyle.

So, Eddie began to look into other treatment options for his acoustic neuroma — including Gamma Knife® radiosurgery. He thought Gamma Knife treatment was promising, but still felt uneasy. Then, after researching the technique online, Eddie found a doctor whose considerable experience put him at ease — L. Dade Lunsford, MD.

Dr. Lunsford, director of the UPMC Center for Image-Guided Neurosurgery, is a pioneer in Gamma Knife treatment. UPMC was the first North American center to offer Gamma Knife radiosurgery when Dr. Lunsford brought it here in 1987. Today, UPMC is a national leader in using this minimally invasive technique to treat hard-to-reach brain tumors.

After several months of weighing his options, Eddie and his family decided to make the 2,000-mile trip to Pittsburgh.

“At that point, I’m thinking if I’m going to do Gamma Knife, I better have it done by the person who’s done the most and at the center that does it the best,” Eddie says.

Despite other surgeons’ insistence that hearing loss was inevitable for Eddie, Dr. Lunsford felt differently. He was confident that Gamma Knife radiosurgery would shrink the tumor and preserve Edward’s hearing.

Eddie received treatment the morning after he arrived in Pittsburgh. During the procedure, Dr. Lunsford aimed hundreds of highly focused radiation beams at Eddie's acoustic neuroma, shrinking it and slowing its growth. Gamma Knife treatment is painless and doesn't require a surgical incision. It also minimizes damage to surrounding nerves and tissues.

The Results: No Hearing Loss or Adverse Effects

Eddie left the hospital the very same day and spent the next few days in Pittsburgh, sightseeing with his family. In fact, he went a concert and a movie a few weeks after surgery and was able to hear with both ears.

Today, his hearing is at the same level it was before his treatment. ​

"It's been over a year since my treatment, and I still have no noticeable hearing loss in the right ear," Eddie says.

Eddie chose UPMC because it gave him the best prognosis for the future. Without any adverse effects from his Gamma Knife treatment, he says he knows he made the right choice. And, he looks forward to an active life with his children.

Our patient stories profile a number of people who have had minimally invasive brain surgery at UPMC. Although everyone's care experience is unique, we hope that sharing these stories will help other prospective patients and their families better understand these procedures and their potential benefits.

Edward's treatment and results may not be representative of all similar cases.

How can we help you? 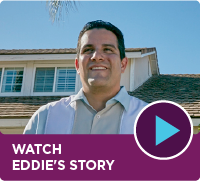