In 1980, Emerson Prattis developed a twitch in his right eye. A Delaware resident, Emerson visited doctors in Philadelphia and Baltimore hoping for a cure. For years, his doctors administered injections, but they had little effect, and MRIs revealed nothing out of the ordinary. Experiencing no improvement, Emerson learned to live with the twitch.

In 2008, he started experiencing spasms in the right side of his face. As a truck driver Emerson felt it was no longer safe to drive because the spasms made his eye close and interfered with his vision. He quit his job and sold his truck.

Emerson’s daughter Vereta felt helpless as she watched him suffer. As her father’s spasms worsened, she began researching his condition, hemifacial spasm, on the Internet, where she found information and videos about a surgery that had been shown to alleviate similar spasms.

“He was led to believe that there was not an operation or anything else my dad could really do to stop that spasm, that he just had to live with it,” Vereta says.

Vereta showed her dad what she found, and he agreed to pursue surgery. With renewed hope, Vereta and several family members started to search for doctors who could perform the surgery. One night, both Vereta and her aunt were in the midst of online research when they came across their answer: UPMC.

“When I called my aunt at 10:00 that night, we had the same doctor and the same hospital, and we thanked God for that,” Vereta says.

Vereta made an appointment with Raymond Sekula Jr., MD, director of the Cranial Nerve Disorders Program at UPMC. Soon after, she and her father made the trip from Delaware to Pittsburgh, and in March 2016, at the age of 78, Emerson underwent a procedure that would eliminate a 36-year-old problem.

Emerson was thrilled with his experience at UPMC and felt so blessed to have been led to Pittsburgh that he was overcome with laughter and joy throughout the surgery and recovery. He left the hospital within a few days of his surgery and now experiences no twitching in his eye or face.

“Pittsburgh is the medical place to be,” says Emerson, who recommends that anyone who can’t find sufficient treatment elsewhere come to UPMC.

Now that the hemifacial spasm, or HFS, that plagued Emerson for so long is gone, he can get back to driving and doing the things he loves. Vereta and the rest of Emerson’s family, which includes 50 grandchildren, are glad to spend time with him as he enjoys a better quality of life than he has in decades.

Our patient stories profile a number of patients who have had minimally invasive brain surgery at UPMC. Although everyone's care experience is unique, we hope that sharing these stories will help other prospective patients and their families better understand these procedures and their potential benefits.

Emerson's treatment and results may not be representative of all similar cases. 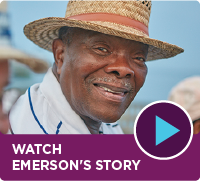