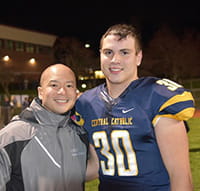 Luke knew something was wrong when he began to have persistent pain in his right shoulder. Wrapping and icing the area was no longer helping to relieve his pain. After reaching a point of barely being able to raise his arm past his shoulder, he knew it was time to see a doctor.

“I knew that something was wrong,” said Luke. “My shoulder was in a lot of pain. I was worried if playing through it would cause more injury.”

After seeing Dr. Lin, Luke and his parents learned that he had torn his right shoulder labrum. It was determined that his injury resulted from overuse, which is common in young athletes. In Luke’s case, he had been playing football since the age of six. Wanting to stay in the game and finish the season, Luke decided to undergo surgery after his season ended.

As the Vikings’ team physician, Dr. Lin had performed surgeries on many of Luke’s teammates, which gave him and his parents peace of mind.

“We were pretty nervous and concerned,” Luke’s mother said. “But we had faith in Dr. Lin from everything we had heard about him.”

Dr. Lin diagnosed Luke with a posterior labral tear and SLAP tear, which are common among football players. During surgery at UPMC Children’s North, Dr. Lin discovered that Luke’s right labrum was torn from top to bottom. Due to the extent of the injury, six anchors were needed to repair it.

Recovery was a seven-month process that consisted of physical therapy three times a week. His therapy focused on strength and motion training to help restore movement and function. For optimal healing, Luke also was instructed to wear a sling for 4-6 weeks.

“Dr. Lin was great and made sure that I was comfortable with everything,” Luke said. “He kept me updated with how rehabilitation would go so that I knew what to expect.”

Now, entering his junior year of high school, Luke returned to the football field with his fellow Vikings and together, they are off to another great season. Healthy and strong, Luke is glad to be back in the game. His parents are grateful for the care and treatment that helped their son return to play.

“He gave us every reason to believe Luke would be back stronger than before,” Luke’s father said. “And he was right.”