A Student Undaunted After Brush With Tragedy 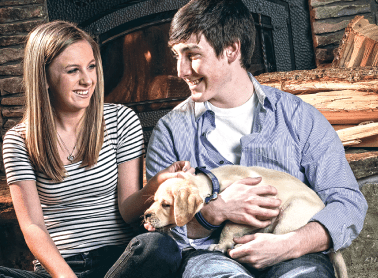 It was 7:13 a.m., April 9, 2014. A sunny spring morning at Franklin Regional High School, just minutes before the start of first period. Students were at their lockers, grabbing books. It was loud with chatter. Everything was normal, exactly as it had been the day before. Then, the fire alarm rang. Junior Jared Boger headed down a stairwell toward the exit, when a student he didn’t know approached him.

They made eye contact as the boy plunged an eight-inch kitchen knife into Jared’s abdomen, puncturing his liver and nearly reaching his spine. The tip missed his heart and aorta by only a few millimeters. Bleeding profusely, he ran to the nurse’s office, where a counselor and gym teacher were able to apply pressure to the wound.

At 7:18 a.m., police arrived and secured the school, rushing 22 stabbing victims outside to waiting ambulances. Jared’s mother learned about the stabbing while she was dropping off her youngest child, Carter, at school. “We didn’t know much at first, but Carter got a text from another student saying that Jared had been stabbed, and my heart just dropped,” says Janet Boger. “I was almost in shock.”

As local EMS crews triaged patients in the parking lots and lawns outside of the school, they noticed Jared was fading quickly. A STAT MedEvac helicopter arrived within minutes to take the most severely injured to trauma centers around the region, and Jared was one of the first to go. As the helicopter landed on the roof of UPMC Presbyterian, a group of trauma experts from the Level I Trauma Center was waiting, ready to assess the damage the knife had done. “As soon as Jared touched down, we rushed him to the trauma bay,” says Dr. Louis Alarcon, medical director of trauma surgery at UPMC Presbyterian. “His condition was very serious. Blood was filling his chest and lungs, and he was losing blood at a rapid pace.”

Just nine minutes after the helicopter’s touchdown, Jared was undergoing surgery. Less than 60 minutes had passed since the knife had nearly taken Jared’s life. “From the EMS providers to the flight paramedics, everyone did a great job of stabilizing Jared and getting him here within a matter of minutes so we could take over and perform the surgeries needed to save his life,” says Dr. Alarcon. “It’s systems like this that really contribute to saving the lives of patients who otherwise may not make it. There aren’t too many trauma systems like ours in the state, or even the country.”

After the trauma team stabilized Jared’s bleeding, his parents were allowed to see him. “We stayed in his room all night, holding his hand,” says Janet. “We knew he wasn’t out of the woods yet.”

Over the next five days, Jared underwent three additional surgeries to fix the damage to his lungs, diaphragm, and liver. He had multiple blood transfusions, totaling nearly 13 liters. With so many nerves severed, he was in terrible pain, but was recovering. After two weeks in the hospital, Jared was discharged and returned to his Murrysville home. "It was nice to get out of the hospital and get back to seeing my friends and family,” says Jared. “I was anxious to get back to doing what I used to do.” And he wasted little time.

A week later, Jared attended the Franklin Regional High School prom. “The whole time I was in the hospital I didn’t think I would be able to go,” says Jared. “But, I made it. And I couldn’t have been happier that day.”

Jared has made nearly a complete recovery. He’s a part-time landscaper, served on the ski patrol at Seven Springs, and recently graduated high school. Though he still feels some slight pain, he doesn’t let that slow him down at all. “I feel like I can do anything I was able to do before that day,” Jared says. “I’m ready to see where life takes me."​