Dr. Lunsford is an internationally recognized authority on stereotactic surgery and has extensive experience with the gamma knife which destroys brain tumors and vascular malformations that were once considered inoperable. It uses 201 sources of cobalt radiation to focus precisely on targeted tissue, minimizing effects on surrounding brain and other critical neural and vascular structures. The treatment is unique because no surgical incision is performed to expose the tumor.

In 1980, he studied for a year at the Karolinska Institute under Dr. Leksell. In 1987, Dr. Lunsford brought the gamma knife to the UPMC, the first center in the United States to use it clinically. In 1996, a second gamma knife unit opened at the UPMC. Since 1987, more than 12,000 patients have undergone gamma knife surgery.

In addition to clinical uses the gamma knife is the focus of various research efforts to enhance the understanding of its effects on the management of pain, movement disorders and epilepsy. Under Dr. Lunsford's leadership, UPMC physicians also pioneered the use of the gamma knife to treat selected cases of brain cancer. 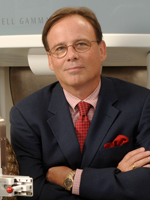