PITTSBURGH – By capitalizing on a convergence of chemical, biological and artificial intelligence advances, University of Pittsburgh School of Medicine scientists have developed an unusually fast and efficient method for discovering tiny antibody fragments with big potential for development into therapeutics against deadly diseases.
The technique, published today in the journal Cell Systems, is the same process the Pitt team used to extract tiny SARS-CoV-2 antibody fragments from llamas, which could become an inhalable COVID-19 treatment for humans. This approach has the potential to quickly identify multiple potent nanobodies that target different parts of a pathogen—thwarting variants.

“Most of the vaccines and treatments against SARS-CoV-2 target the spike protein, but if that part of the virus mutates, which we know it is, those vaccines and treatments may be less effective,” said senior author Yi Shi, Ph.D., assistant professor of cell biology at Pitt. “Our approach is an efficient way to develop therapeutic cocktails consisting of multiple nanobodies that can launch a multipronged attack to neutralize the pathogen.”
Shi and his team specialize in finding nanobodies—which are small, highly specific fragments of antibodies produced by llamas and other camelids. Nanobodies are particularly attractive for development into therapeutics because they are easy to produce and bioengineer. In addition, they feature high stability and solubility, and can be aerosolized and inhaled, rather than administered through intravenous infusion, like traditional antibodies. 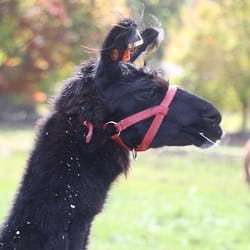 By immunizing a llama with a piece of a pathogen, the animal’s immune system produces a plethora of mature nanobodies in about two months. Then it’s a matter of teasing out which nanobodies are best at neutralizing the pathogen—and most promising for development into therapies for humans.
That’s where Shi’s “high-throughput proteomics strategy” comes into play.
“Using this new technique, in a matter of days we’re typically able to identify tens of thousands of distinct, highly potent nanobodies from the immunized llama serum and survey them for certain characteristics, such as where they bind to the pathogen,” Shi said. “Prior to this approach, it has been extremely challenging to identify high-affinity nanobodies.”
After drawing a llama blood sample rich in mature nanobodies, the researchers isolate those nanobodies that bind specifically to the target of interest on the pathogen. The nanobodies are then broken down to release small “fingerprint” peptides that are unique to each nanobody. These fingerprint peptides are placed into a mass spectrometer, which is a machine that measures their mass. By knowing their mass, the scientists can figure out their amino acid sequence—the protein building blocks that determine the nanobody’s structure. Then, from the amino acids, the researchers can work backward to DNA—the directions for building more nanobodies. 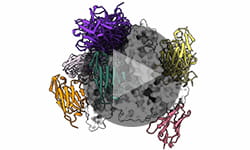 Simultaneously, the amino acid sequence is uploaded to a computer outfitted with artificial intelligence software. By rapidly sifting through mountains of data, the program “learns” which nanobodies bind the tightest to the pathogen and where on the pathogen they bind. In the case of most of the currently available COVID-19 therapeutics, this is the spike protein, but recently it has become clear that some sites on the spike are prone to mutations that change its shape and allow for antibody “escape.” Shi’s approach can select for binding sites on the spike that are evolutionarily stable, and therefore less likely to allow new variants to slip past.
Finally, the directions for building the most potent and diverse nanobodies can then be fed into vats of bacterial cells, which act as mini factories, churning out orders of magnitude more nanobodies compared to the human cells required to produce traditional antibodies. Bacterial cells double in 10 minutes, effectively doubling the nanobodies with them, whereas human cells take 24 hours to do the same.
“This drastically reduces the cost of producing these therapeutics,” said Shi.
Shi and his team believe their technology could be beneficial for more than just developing therapeutics against COVID-19—or even the next pandemic. 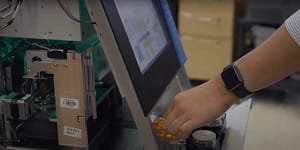 “The possible uses of highly potent and specific nanobodies that can be identified quickly and inexpensively are tremendous,” said Shi. “We’re exploring their use in treating cancer and neurodegenerative diseases. Our technique could even be used in personalized medicine, developing specific treatments for mutated superbugs for which every other antibiotic has failed.”
Additional researchers on this publication are Yufei Xiang and Jianquan Xu, Ph.D., both of Pitt; Zhe Sang of Pitt and Carnegie Mellon University; and Lirane Bitton and Dina Schneidman-Duhovny, Ph.D., both of the Hebrew University of Jerusalem.
This research was supported by the UPMC Aging Institute, National Institutes of Health grant 1R35GM137905-01, Israel Science Foundation grant 1466/18, the Ministry of Science and Technology of Israel and the Hebrew University of Jerusalem Center for Interdisciplinary Data Science Research.  MULTIMEDIA INFO: (click images for high-res versions)

CAPTION: Wally the llama, whose blood was the source of the nanobodies used for the project.