PITTSBURGH – A single misbehaving protein – called TDP-43 – is behind 97 percent of amyotrophic lateral sclerosis (ALS) cases and 45 percent of frontotemporal dementia diagnoses. It also is found in 80 percent of chronic traumatic encephalopathy and 60 percent of Alzheimer’s disease cases. Now, University of Pittsburgh researchers have found a way to trap TDP-43 so it doesn’t form toxic clumps that can cause neurodegeneration. 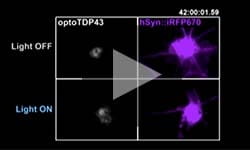 A new study, published today in Neuron, shows how TDP-43 pathology can be recreated in the lab, and how an oligonucleotide – a short strand of RNA – made to mimic cells’ natural protective mechanism can rescue neurons from TDP-43 accumulation.
“The problem is the vast majority of patients with neurodegenerative disorders do not have specific mutations,” said senior author Christopher Donnelly, Ph.D., assistant professor of neurobiology and scientific director of the LiveLikeLou Center for ALS Research at the University of Pittsburgh Brain Institute. “Instead of targeting the gene that causes disease in a subset of patients, we’re targeting the proteins that clump in nearly all of them. That’s never been done before.” 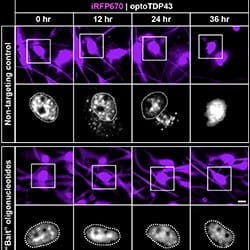 First, Donnelly and his team had to reproduce TDP-43 pathology in cultured human cells – a “disease in a dish” – so they developed a system that uses light pulses to push these proteins together into poisonous little balls. The method was so effective they could watch the cells die right before their eyes.
Looking closer, Donnelly’s team discovered that this technique worked only when the TDP-43 RNA binding partners were missing.
These RNA binding partners lock together with the TDP-43 protein, preventing it from forming clumps. That’s what protects normal cells against toxic TDP-43 buildup, Donnelly said.
Taking inspiration from this naturally occurring defense mechanism, Donnelly’s team created TDP-43-targeting oligonucleotides that mimic the action of its RNA binding partners.
“We call them ‘bait-oligonucleotides,’” Donnelly said. “If you’re fishing, you’re trying to use bait to trap the fish. In our case, we’re leaving the bait there for the extra protein to keep it from clumping together.”
And it worked. Baiting the TDP-43 proteins prevented aggregation and kept the cells from dying.
This same “disease in a dish” approach also could be applied to other proteins notorious for their neurotoxic clumps, such as Tau in Alzheimer’s and α-synuclein in Parkinson’s disease, Donnelly said. They, too, may have natural “bait” to exploit.
But at this point, Donnelly noted, it’s important to remember that any therapy developed in the dish has to be tested in animal experiments and human clinical trials before it becomes widely available.
The encouraging part is that Donnelly’s oligonucleotide would not be the first to go through that process. One such drug, targeting the genetic mutation behind spinal muscular atrophy, is already on the market, and two more for ALS are making their way through clinical trials.
What makes Donnelly’s different is that his oligonucleotide would be the first to target protein aggregation directly – an approach that has the potential to help a lot of people.
“It seems to be this same thing that happens in all these diseases,” said lead author Jacob Mann, a graduate student in Donnelly’s lab. “Why that is, we still don’t know, but if we can hit that convergence point and stop it there, we think that would be applicable to a lot of patients.”
Additional authors from Pitt include Amanda Gleixner, Ph.D., Jocelyn Mauna, M.S., Michael DeChellis-Marks, Patrick Needham, Ph.D., Katie Copley, Bryan Hurtle, Noah Pyles, Christopher Calder, Zachary Wills, Ph.D., Udai Pandey, Ph.D., Julia Kofler, M.D., Jeffrey Brodsky, Ph.D., and Amantha Thathiah, Ph.D. Coauthors from outside Pitt include Edward Gomes, M.S., Bede Portz, Ph.D., Lin Guo, Ph.D., and James Shorter, Ph.D., all from the University of Pennsylvania.
This research was funded by the National Institutes of Health (R01 NS105756, R21 NS098379, R01 GM099836, R21 NS090205, GM075061, DK079307 and P50 AG005133). Additional support was provided by the LiveLikeLou Fund at the Pittsburgh Foundation, a gift from Barbara McCormick, Target ALS, the Frick Foundation for ALS Research, the ALS Association and the Life Extension Foundation.

Video: Under blue light control, TDP-43 proteins aggregate inside the neuron and cause it to die.