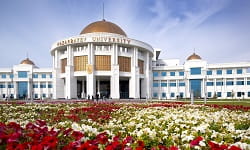 PITTSBURGH – In an extension of its long-time efforts to improve the health of the people of Kazakhstan, UPMC announced today that it has signed a new advisory agreement with Nazarbayev University (NU). A key part of the deal is to help NU fully integrate patient care, education and research at its hospitals and clinics, adapting UPMC’s successful model in Pittsburgh.
The agreement follows more than six years of cooperation between Pittsburgh and NU to advance patient care in Kazakhstan. “Our partnership with Nazarbayev University and its University Medical Center hospitals continues to evolve to meet the changing needs of these institutions,” said Chuck Bogosta, president of UPMC International. “We are pleased that NU continues to see value in our wide-ranging expertise and proven ability to deliver high-quality, cost-effective care in a rigorous academic medical center environment.”
UPMC signed its first agreement in Kazakhstan in 2012. While the focus of UPMC’s advisory work with NU has shifted since that time, the two partners remain committed to delivering health outcomes comparable to the most developed countries in the world, as outlined in President Nazarbayev’s Kazakhstan 2050 Strategy.
The latest agreement is aimed at transforming University Medical Center’s (UMC) health system into Kazakhstan’s first fully integrated academic medical center, one that is financially viable, actively engaged in research, and dedicated to training and educating medical staff. As part of that effort, UPMC will help NU to pilot six academic departments in women’s health, pediatrics, pathology, general surgery, family medicine and internal medicine.
UPMC also is helping UMC’s leadership in Astana with strategic planning; education and training, including a new model for graduate medical education; collaborative clinical trials with the University of Pittsburgh and UPMC; hospital information systems; and cost tracking and management.
Part of NU’s integrated academic health care system, UMC was established in September 2015 based on the former three National Medical Holding clinics – the Republic Diagnostic Center, the National Research Center for Maternal and Child Health and the Republican Children’s Rehabilitation Center. All three have been accredited by the Joint Commission International. Nazarbayev University School of Medicine, which admitted its first group of medical students in August 2015, is being developed in collaboration with the University of Pittsburgh School of Medicine, UPMC’s academic partner.