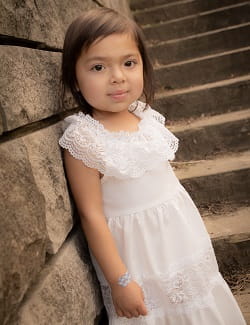 PITTSBURGH – Rosie Vargas, a transplant patient at UPMC Children’s Hospital of Pittsburgh, has been named a 2020 Children’s Miracle Network Hospitals (CMNH) champion for Pittsburgh.
Rosie, originally from Ventura County, Calif., has received two liver transplants at UPMC Children’s. At just 9 months old, her first transplant was from a living related donor and necessary to cure her maple syrup urine disease (MSUD), a genetic disorder of metabolism in which the body cannot process certain protein elements and can lead to irreparable brain damage.
Rosie and her parents sought out UPMC Children’s as the nation’s leading medical center for children with MSUD needing liver transplants. However, due to a rare complication, Rosie’s living-donor liver transplant was not effective, and she was listed for a repeat transplantation. Rosie and her parents relocated to Pittsburgh and waited two years for a suitable liver to become available.
Her second liver transplant, this from a deceased donor, was performed in July 2018 and has been a great success. Now 6 years old, Rosie’s long-term prognosis is excellent, and she continues to be monitored routinely by the UPMC transplant team.
“Rosie is such a bright light, an inspiration to so many, and we are thrilled she was chosen this year as the 2020 CMNH Champion,” said George Mazariegos, M.D., chief of pediatric transplantation, UPMC Children’s. “We want to thank Children’s Miracle Network Hospitals for giving her the opportunity to be recognized and celebrated. She will be an amazing ambassador and will represent UPMC Children’s and our patients in an outstanding way.”
As the CMNH Champion, announced today at a special kickoff event at the Pittsburgh Airport Marriott, Rosie will represent UPMC Children’s at local community fundraising events with CMNH national partners.
“Rosie is a strong, brave, determined and loving little girl. The amazing care she has received at UPMC Children’s has allowed her to blossom,” said Sarah and Tony Vargas, Rosie’s parents. “CMNH helps fund the programs that make visits and admissions more fun and we can’t thank them enough for their support.”
UPMC Children’s Hospital has been a member of CMNH since 1986 and donations raised locally benefit the hospital. The CMNH Champions program celebrates a child from every CMNH in the United States who has bravely battled a serious injury or illness.