PITTSBURGH  – Social media has given those espousing anti-vaccination sentiments an effective medium to spread their message. However, an analysis of a viral Facebook campaign against a Pittsburgh pediatric practice reveals that the movement isn’t “all about autism.” Instead, the research from the University of Pittsburgh Center for Research on Media, Technology, and Health finds that anti-vaccination arguments center on four distinct themes that can appeal to diverse audiences. 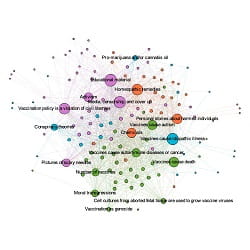 The research, published today in the journal Vaccine, suggests a framework that pediatricians can use to open a conversation with parents who are hesitant to immunize their children, while also “inoculating” those parents with skills to resist anti-vaccination messages on social media.
“If we dismiss anybody who has an opposing view, we’re giving up an opportunity to understand them and come to a common ground,” said senior author Brian Primack, M.D., Ph.D., director of Pitt’s Center for Research on Media, Technology, and Health, and dean of the Pitt Honors College. “That’s what our research is about. We want to understand vaccine-hesitant parents in order to give clinicians the opportunity to optimally and respectfully communicate with them about the importance of immunization.”
Vaccines are hailed as one of the greatest public health achievements of modern medicine and have prevented more than 100 million cases of serious childhood contagious diseases. However, in the U.S., only 70 percent of children ages 19 to 35 months receive all recommended immunizations, and, so far this year, hundreds of children in a dozen states have contracted measles, a disease that was declared eliminated in the U.S. nearly two decades ago due to high vaccination rates. In Europe, tens of thousands of children have been diagnosed with the vaccine-preventable disease, and dozens have died in the past year.
In 2017, Kids Plus Pediatrics, a Pittsburgh-based pediatric practice, posted a video on its Facebook page featuring its practitioners encouraging HPV vaccination to prevent cancer. Nearly a month after the video posted, it caught the attention of multiple anti-vaccination groups and, in an eight-day period, garnered thousands of anti-vaccination comments.
Elizabeth Felter, Dr.P.H., assistant professor of community and behavioral health sciences at Pitt’s Graduate School of Public Health, connected Kids Plus Pediatrics with graduate student Beth Hoffman, B.Sc., and scientists at the Center for Research on Media, Technology, and Health. Hoffman led the team in partnering with the pediatrics practice to perform a systematic analysis to better understand the people behind the comments and how they cluster in the digitally-connected world of social media.
Hoffman’s team analyzed the profiles of a randomly selected sample of 197 commenters and determined that, although Kids Plus Pediatrics is an independent practice caring for patients in the Pittsburgh region, the commenters in the sample were spread across 36 states and eight countries.
The team also found that the majority of commenters were mothers. In those for which it could be determined, the top two political affiliations of the commenters were divergent, with 56 percent expressing support for Donald Trump, and 11 percent expressing support for Bernie Sanders.
By delving into the messages that each commenter had publicly posted in the previous two years, the team found that they clustered into four distinct subgroups:
“The presence of these distinct subgroups cautions against a blanket approach to public health messages that encourage vaccination,” Hoffman said. “For example, telling someone in the ‘trust’ subgroup that vaccines don’t cause autism may alienate them because that isn’t their concern to begin with. Instead, it may be more effective to find common ground and deliver tailored messages related to trust and the perception mandatory vaccination threatens their ability to make decisions for their child.”
Todd Wolynn, M.D., chief executive officer of Kids Plus Pediatrics and a co-author of the research paper, said that although the negative comments in reaction to the practice’s video were disheartening, he’s glad it turned into a learning experience that may benefit other clinicians.
“We’re focused on keeping kids healthy and preventing disease whenever possible. In this age of social media disinformation, evidence-based recommendations from a trusted health care provider are more important than ever,” he said. “We’re thrilled to play such a key role in research that empowers pediatricians worldwide to meet parents where they are, appreciate their concerns, and communicate the incredible power and value of vaccination.”
Additional authors on this research are Kar-Hai Chu, Ph.D., Ariel Shensa, M.A., and Daria Williams, all of Pitt; and Chad Hermann, Ph.D., of Kids Plus Pediatrics.
All funding to perform this analysis was provided by Pitt.

Caption: An analysis of Facebook profiles for people who posted anti-vaccination sentiments reveals four key subgroups that are interconnected by various themes.

A $21 billion health care provider and insurer, Pittsburgh-based UPMC is inventing new models of patient-centered, cost-effective, accountable care. The largest nongovernmental employer in Pennsylvania, UPMC integrates more than 90,000 employees, 40 hospitals, 700 doctors’ offices and outpatient sites, and a 3.8 million-member Insurance Services Division, the largest medical insurer in western Pennsylvania. In the most recent fiscal year, UPMC contributed $1.4 billion in benefits to its communities, including more care to the region’s most vulnerable citizens than any other health care institution, and paid more than $500 million in federal, state and local taxes. Working in close collaboration with the University of Pittsburgh Schools of the Health Sciences, UPMC shares its clinical, managerial and technological skills worldwide through its innovation and commercialization arm, UPMC Enterprises, and through UPMC International. U.S. News & World Report consistently ranks UPMC Presbyterian Shadyside on its annual Honor Roll of America’s Best Hospitals and ranks UPMC Children’s Hospital of Pittsburgh on its Honor Roll of America’s Best Children’s Hospitals. For more information, go to UPMC.com.