PITTSBURGH – About a third of us are walking around with the bacteria that causes tuberculosis (TB) in our bodies, but most don’t actually end up with TB. For children living with HIV – about 2 million at last estimate – it’s a different story. They’re much more likely to develop TB, and about 40,000 HIV-positive children die from it each year.
To explore exactly how HIV puts children at greater risk of contracting and dying from TB, an international team of scientists, led by researchers at the University of Pittsburgh, University of Wisconsin-Madison and University of Hawaii at Mānoa, have secured a five-year, $6.2 million grant from the National Institute of Allergy and Infectious Diseases. The grant will fund nonhuman primate experiments to understand disease mechanisms and explore a potential therapeutic approach. Then, extending from the laboratory to the field, the researchers will investigate whether the same findings are true for children living in Myanmar, where rates of HIV and TB are both high.
“Kids are not small adults. They have distinct immune responses. You can’t necessarily extrapolate results from adults to kids,” said principal investigator Charles Scanga, Ph.D., research associate professor of microbiology and molecular genetics Pitt School of Medicine. “Our first goal is to check whether we see in kids what we have already shown in adults—in a model of kids who may go many months or years without being diagnosed, which is the unfortunate clinical reality in underserved parts of the world.” 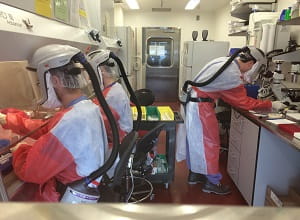 Scanga’s lab is located in Pitt’s Center for Vaccine Research, which is one of the few infectious disease labs in the world equipped with a PET-CT scanner. That imaging technology allows Scanga to observe disease progression in infected animals over time.
Scanga uses adolescent monkeys, age 1.5 to 2 years, which is equivalent to age 10 to 14 in humans. He will infect them with SIV – the monkey version of HIV – and, after several weeks, treat them with antiviral drugs like those used to treat people living with HIV. Next, he will expose them to the bacteria that causes TB.
In Scanga’s previous work with adult monkeys, the SIV-positive animals fared much worse than their SIV-negative counterparts, with faster TB progression.
The reason, Scanga hypothesizes, is that SIV attacks the natural killer T cells and mucosal-associated invariant T cells in the lungs that would normally act as a first defense against TB. In response, these cells produce more of the protein PD-1, which leads to immune exhaustion and failure to respond to invading bacteria.
The next step is to see whether it’s possible to reverse immune exhaustion to fend off TB more effectively. So, Scanga teamed up with Shelby O’Connor, Ph.D., associate professor of pathology and laboratory medicine at the University of Wisconsin-Madison.
They plan to treat SIV-positive monkeys with a cancer immunotherapy drug, a PD-1 blocker, that reverses immune exhaustion so that T cells might better prevent TB bacteria from infiltrating the lungs.
“It’s amazing to me how the interventions for people living with HIV are merging with those used to treat cancer,” O’Connor said. “While the diseases are quite different, there also are many similarities in how an affected person responds to each disease.”
Extending these questions from the laboratory to the field, the researchers initiated a collaboration with Lishomwa Ndhlovu, M.D., Ph.D., professor of tropical medicine in the John A. Burns School of Medicine  at the University of Hawaii.
In collaboration with the Yangon Children’s Hospital, Ndhlovu and his team will look at blood samples from children in Myanmar. The idea is to see whether children living with HIV have the same T cell deficiencies and immune exhaustion markers as the laboratory animals do, and whether those markers correlate with TB coinfection rates.
“Children with HIV are very vulnerable to TB, and anything we can do to try to better understand the pathology of the disease and potentially develop new interventions would make a great dent in the morbidity and mortality of the two diseases,” Ndhlovu said.
Other collaborators on the grant include Stephen Kent, Ph.D., at the University of Melbourne Peter Doherty Institute for Infection and Immunity in Australia, and Kyaw Linn, M.D., at Mingaladon Specialist Hospital in Yangoon, Myanmar.

Caption: Research into the mechanism of HIV and TB coinfection will happen at Pitt's Center for Vaccine Research
Credit: University of Pittsburgh