PITTSBURGH – UPMC, a leading integrated health care provider and insurer, announced today that it is establishing the UPMC Global Technology Operations Center in Kilkenny, Ireland to support the health system’s continuing international expansion. The new center is expected to employ more than 60 skilled technology workers and other support staff over the next three years, adding to the more than 475 UPMC staff already in Ireland.
The project is supported by the Irish government through IDA Ireland.
The southeast region of Ireland was chosen because of its proximity to other key UPMC health care facilities in Waterford, Cork, Carlow and Kildare, as well as for the country’s strong tech talent pool, business-friendly environment, significant presence of other major tech companies and its active innovation community supporting tech startups and incubators.
“Our multinational business requires a technology platform that allows us to consistently provide the highest-quality care at the lowest cost, regardless of location,” said Ed McCallister, chief information officer of UPMC. “As we considered locations worldwide that would best meet our needs, Ireland—and its centrally located, multi-cultural work force—quickly rose to the top.” 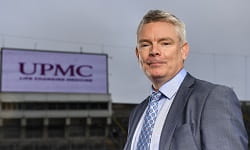 UPMC International Senior Vice President David Beirne, who also is managing director of UPMC in Ireland, noted that support from IDA Ireland, which encourages foreign investment and job creation, was one of many advantages that UPMC weighed. “This new center will give us the unique ability to accommodate regulatory, cultural and language requirements across our international sites, including in Ireland, Italy, Kazakhstan and China.”
To prepare for the opening of its new office and data center in Kilkenny, UPMC already is hiring network, systems and security engineers, security and privacy analysts and other information technology managers in Ireland.
With multiple hospitals, cancer centers and other health care facilities in Italy and Ireland, an advisory agreement to support an academic medical center in Kazakhstan and a planned partnership to manage a network of new hospitals in China, UPMC has one of the largest and most experienced international divisions of any U.S. academic medical center. With a focus on offering patients the best care close to home—wherever that may be—UPMC partners with health care providers, governments and others in its four focus countries to create sustainable, high-quality health care services.