PITTSBURGH – As they prepare to begin construction of a 256-bed hospital in Italy that embodies lessons learned from the COVID-19 pandemic, UPMC and the Region of Sicily today announced that internationally renowned architect Renzo Piano and his team are designing the facility, to be located near Carini. 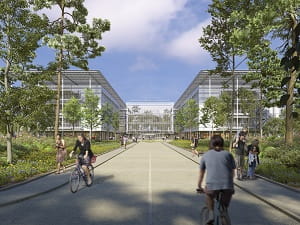 Expected to open in 2025, the new hospital will expand access to specialized services for the region. It will be integrated with the Ri.MED Foundation’s Biomedical Research and Biotechnology Center (BRBC), currently under construction on the same site. Together, these facilities are expected to drive biomedical advances and spinoff companies that will transform the delivery of care to patients while boosting the economy of Sicily. Funded by the regional and national governments of Italy, the new hospital (currently dubbed “ISMETT 2”) and the BRBC will be managed by UPMC, which has operated the ISMETT transplant and high-specialty hospital in nearby Palermo for more than 20 years.
“With the creation of this new academic hospital, the biomedical hub being established in Sicily is unprecedented in Europe,” said Jeffrey Romoff, president and chief executive officer of UPMC. “This collection of extraordinary facilities is emblematic of everything that UPMC, in partnership with the University of Pittsburgh, stands for—cutting-edge research and science rapidly driving advances in patient care and strengthening the communities and economies that we serve.”
At a ceremony today in Palermo marking the announcement of the new architect, Romoff was joined by the president of the Region of Sicily, Nello Musumeci, the regional health commissioner, Ruggero Razza, and Elisabetta Trezzani of Renzo Piano Building Workshop (RPBW), who unveiled preliminary designs for ISMETT 2.
“UPMC’s commitment to Italy started more than two decades ago, when we courageously initiated our public-private partnership with Sicily to ensure that patients did not have to leave the region for transplants. Since then, ISMETT has become a center of excellence not just for Sicily but for all of Italy and, indeed, the world,” said Bruno Gridelli, M.D., country manager of UPMC in Italy. “ISMETT 2 will build upon that success and embrace scientific and technological advances that would have been considered science fiction when the first ISMETT was created.”
Designed to eventually replace the original hospital at a cost of more than 180 million euros, ISMETT 2 will continue the extensive transplantation programs and highly specialized therapies that served more than 2,600 patients last year. It will add advanced programs in oncology, orthopaedics and neuroscience, expanding the range of treatments available to patients in Sicily. Like ISMETT, the new hospital will be included in the regional network that treats cardiovascular emergencies, such as heart attacks and strokes.
“ISMETT 2 will be a point of reference not just for patients in Sicily but for the entire Eurasian basin. With this hospital, we will be able to guarantee specialized interventions and reduce the ‘journeys of hope’ that send so many Italians far from home for life-saving care,” said Musumeci.
Based on the health care system’s experience during the COVID-19 pandemic, ISMETT 2 is designed to rapidly allow the conversion of ordinary inpatient beds into intensive and sub-intensive beds, while ensuring best practices in infection control and the seamless and separate care of patients with both chronic and infectious diseases.
As with the current ISMETT and other UPMC facilities in Italy, technological innovation will play a key role in the new structure, including an electronic medical record and digital administrative and accounting sytems  across all departments. Backed by UPMC’s expertise in Pittsburgh, clinical decision support systems that harness artificial intelligence and machine learning will help clinicians ensure delivery of the right care at the right time, with a focus on information security and privacy. The information technology infrastructure also will support the integration of research into patient care.
“Hospitals are places of medical excellence that today must respond even better to the need for humanity—as we’ve seen more than ever in this pandemic,” said architect Renzo Piano. “A hospital must treat, but it must also be hospitable and give comfort. Being in a beautiful place has a therapeutic value. Fortunately, architecture is not only the art of responding to needs, but also to desires and, above all, hopes.”
Established in 1981, RPBW has completed over 140 projects around the world, including the Centre Georges Pompidou in Paris, the Shard in London and the Whitney Museum of American Art in New York.
Founded in June 1997 by the Region of Sicily and UPMC, ISMETT was included in the regional health system in 2012 and two years later was designated as a government-approved research hospital, or Istituto di Ricovero e Cura a Carattere Scientifico. The designation acknowledges ISMETT for its excellence in research, training, quality of care and management of health services.
In 2019, the Ri.MED Foundation became part of ISMETT’s governance structure. The foundation was established in 2006 by the Italian Presidency of the Council of Ministers, UPMC, the University of Pittsburgh, the Italian National Research Center and the Region of Sicily. Since then, dozens of young Italian researchers have been trained in Pittsburgh and in other top national and international research centers to become the leaders of the BRBC’s research programs. PHOTO INFO: (click image for high-res version)