PITTSBURGH – The growing number of children arriving at Texas schools unvaccinated makes the state increasingly vulnerable to measles outbreaks in cities large and small, according to a computer simulation created by the University of Pittsburgh Graduate School of Public Health.
The findings, published today in the journal JAMA Network Open, indicate that an additional 5% decrease in vaccination rates, which have been on a downward trend since 2003, would increase the size of a potential measles outbreak by up to 4,000% in some communities.
“At current vaccination rates, there’s a significant chance of an outbreak involving more than 400 people right now in some Texas cities,” said lead author David Sinclair, Ph.D., a postdoctoral researcher in Pitt’s Public Health Dynamics Laboratory. “We forecast that a continuous reduction in vaccination rates would exponentially increase possible outbreak sizes.”
Measles is a highly contagious virus that can cause severe complications, including pneumonia, brain swelling and deafness. Approximately 1 out of every 1,000 children infected with measles will die from respiratory and neurologic complications. Measles is so contagious that, if no one was immunized, one infected person is likely to infect 12 to 16 others; in comparison, one person infected with the flu is expected to infect only one to two people. The measles vaccine — which is often combined with the mumps and rubella vaccines and called the “MMR vaccine” — is highly effective, conveying 97% immunity after two doses.
Sinclair and his team loaded real-world vaccination data for private schools and public school districts in Texas in the Framework for Reconstructing Epidemiological Dynamics (FRED) tool. FRED is an “agent-based” modeling system, which means it creates a synthetic population using U.S. Census data and then assigns the synthetic people to move about their communities from home to work or school as people do in the real world. This tool allows users to see, in silica, how a contagion could spread from person to person. In 2015, California legislators used FRED to help convince their peers to pass a bill restricting vaccine exemptions for school-age children. 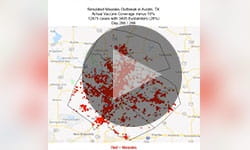 The Texas Pediatric Society asked Pitt Public Health to model Texas in FRED to demonstrate the possibility of outbreaks in communities with low vaccination rates. Texas is the largest state by population that allows parents to opt their children out of required vaccines for religious or personal reasons. These exemptions have increased 28-fold in Texas, from 2,300 in 2013 to 64,000 in 2016. Austin is the current home of Andrew Wakefield, a discredited former British doctor who published falsified research linking vaccines to autism and who continues to espouse anti-vaccine messages.
In the FRED Measles Texas simulation, a single case of measles is introduced into various metropolitan areas through a randomly selected student whose parents have refused to vaccinate. The simulation runs for each city for 270 days — the length of the typical school year — at current vaccination rates and at a hypothetical decrease in those rates.
At current rates, the simulation estimates that measles outbreaks of more than 400 cases could occur in Austin and Dallas-Fort Worth. This is partly due to a minority of schools where vaccination rates are less than 92% — low enough for measles to sustain transmission.
If the vaccination rate drops 5% in only the schools with populations that currently are undervaccinated, the size of potential measles outbreaks climbs exponentially in every metropolitan area, with Dallas-Fort Worth, Austin and Houston all susceptible to outbreaks of 500 to 1,000 people.
Approximately 64% of the simulated cases occur in children who were unvaccinated because they had a religious or personal exemption. But the model forecasts 36% of the cases would be in people who have a medical condition that prohibited vaccination, whose vaccine failed to build immunity or in unvaccinated adults, for whom the risk of complications is higher than children.
“When someone refuses to be vaccinated, they are making a decision that doesn’t only impact them. They are increasing the risk that people who are not immune, through no fault of their own, will get very sick and possibly die,” said senior author Mark Roberts, M.D., M.P.P., professor and chair of Pitt Public Health’s Department of Health Policy and Management, and director of Pitt’s Public Health Dynamics Laboratory.
Additional authors on this research are John J. Grefenstette, Ph.D., Mary G. Krauland, Ph.D., David D. Galloway, M.S., Robert J. Frankeny, M.S.I.S., and Donald S. Burke, M.D., all of Pitt; and Clayton Travis, M.S.S.W., of the Texas Pediatric Society.
This research was funded by the National Institutes of Health Models of Infectious Disease Agent Study, grant number U54 GM088491. Several of the authors disclose potential conflicts of interest that can be found in the journal manuscript.