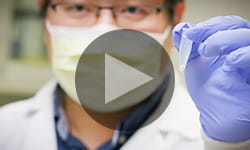 PITTSBURGH – University of Pittsburgh School of Medicine scientists have isolated the smallest biological molecule to date that completely and specifically neutralizes the SARS-CoV-2 virus, which is the cause of COVID-19. This antibody component, which is 10 times smaller than a full-sized antibody, has been used to construct a drug—known as Ab8—for potential use as a therapeutic and prophylactic against SARS-CoV-2.
The researchers report today in the journal Cell that Ab8 is highly effective in preventing and treating SARS-CoV-2 infection in mice and hamsters. Its tiny size not only increases its potential for diffusion in tissues to better neutralize the virus, but also makes it possible to administer the drug by alternative routes, including inhalation. Importantly, it does not bind to human cells—a good sign that it won’t have negative side-effects in people.
Ab8 was evaluated in conjunction with scientists from the University of North Carolina at Chapel Hill (UNC) and University of Texas Medical Branch (UTMB) at Galveston, as well as the University of British Columbia and University of Saskatchewan. 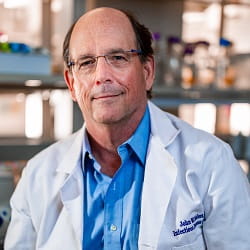 “Ab8 not only has potential as therapy for COVID-19, but it also could be used to keep people from getting SARS-CoV-2 infections,” said co-author John Mellors, M.D., chief of the Division of Infectious Diseases at UPMC and Pitt. “Antibodies of larger size have worked against other infectious diseases and have been well tolerated, giving us hope that it could be an effective treatment for patients with COVID-19 and for protection of those who have never had the infection and are not immune.”
The tiny antibody component is the variable, heavy chain (VH) domain of an immunoglobulin, which is a type of antibody found in the blood. It was found by “fishing” in a pool of more than 100 billion potential candidates using the SARS-CoV-2 spike protein as bait. Ab8 is created when the VH domain is fused to part of the immunoglobulin tail region, adding the immune functions of a full-size antibody without the bulk.

Like the Pitt and UPMC vaccine candidate PittCoVacc that delivers an immunization through a spiky Band-Aid-like patch and overcomes the need for needles and refrigeration, the researchers are “thinking outside the box” when it comes to how Ab8 could be administered. Its small size might allow it to be given as an inhaled drug or intradermally, rather than intravenously through an IV drip, like most monoclonal antibodies currently in development. 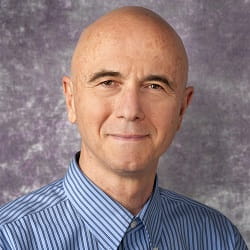 Dimiter Dimitrov, Ph.D., senior author of the Cell publication and director of Pitt’s Center for Antibody Therapeutics, was one of the first to discover neutralizing antibodies for the original SARS coronavirus in 2003. In the ensuing years, his team discovered potent antibodies against many other infectious diseases, including those caused by MERS-CoV, dengue, Hendra and Nipah viruses. The antibody against Hendra and Nipah viruses has been evaluated in humans and approved for clinical use on a compassionate basis in Australia.
Clinical trials are testing convalescent plasma—which contains antibodies from people who already had COVID-19—as a treatment for those battling the infection, but there isn’t enough plasma for those who might need it, and it isn’t proven to work. 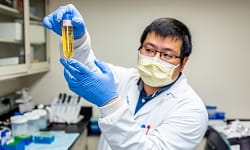 That’s why Dimitrov and his team set out to isolate the gene for one or more antibodies that block the SARS-CoV-2 virus, which would allow for mass production. In February, Wei Li, Ph.D., assistant director of Pitt’s Center for Therapeutic Antibodies and co-lead author of the research, began sifting through large libraries of antibody components made using human blood samples and found multiple therapeutic antibody candidates, including Ab8, in record time.
Then a team at UTMB’s Center for Biodefense and Emerging Diseases and Galveston National Laboratory, led by Chien-Te Kent Tseng, Ph.D., tested Ab8 using live SARS-CoV-2 virus. At very low concentrations, Ab8 completely blocked the virus from entering cells. With those results in hand, Ralph Baric, Ph.D., and his UNC colleagues tested Ab8 at varying concentrations in mice using a modified version of SARS-CoV-2 . Even at the lowest dose, Ab8 decreased by 10-fold the amount of infectious virus in those mice compared to their untreated counterparts. Ab8 also was effective in treating and preventing SARS-CoV-2 infection in hamsters, as evaluated by Darryl Falzarano, Ph.D., and colleagues at the University of Saskatchewan. Sriram Subramaniam, Ph.D., and his colleagues at the University of British Columbia uncovered the unique way Ab8 neutralizes the virus so effectively by using sophisticated electron microscopic techniques.
“The COVID-19 pandemic is a global challenge facing humanity, but biomedical science and human ingenuity are likely to overcome it,” Mellors said. “We hope that the antibodies we have discovered will contribute to that triumph.”
Additional co-lead authors of this research are Xianglei Liu, M.D., Ph.D., of Pitt; Alexandra Schäfer, Ph.D., and David R. Martinez, Ph.D., both of the University of North Carolina at Chapel Hill; and Swarali S. Kulkarni, M.Sc., of the University of Saskatchewan. Additional authors are Chuan Chen, Ph.D., Zehua Sun, Ph.D., Liyoung Zhang, Ph.D., all of Pitt; Sarah R. Leist, Ph.D., of the University of North Carolina at Chapel Hill; Aleksandra Drelich, Ph.D., of the University of Texas Medical Branch; Marcin L. Ura, Ph.D., and Eric Peterson, M.S., both of Abound Bio; and Alison Berezuk, Ph.D., Sagar Chittori, Ph.D., Karoline Leopold, Ph.D., Dhiraj Mannar, B.Sc., Shanti S. Srivastava, Ph.D., and Xing Zhu, Ph.D., all of the University of British Columbia.
This research was funded by National Institutes of Health grants F32 AI152296, T32 AI007151, AI132178, AI108197 and P30CA016086, as well as UPMC; the Burroughs Wellcome Fund; a Canada Excellence Research Chair Award; Genome BC, Canada; Canadian Institutes for Health Research; and Canadian Foundation for Innovation.  MULTIMEDIA INFO: (click images for high-res versions)

CAPTION: John Mellors, M.D., chief of infectious diseases, UPMC and the University of Pittsburgh, discusses a scientific breakthrough that is a major step toward a potential drug to treat and prevent COVID-19.

CAPTION: Wei Li, Ph.D., of Pitt, demonstrates a step in the process of obtaining a potential drug against COVID-19.