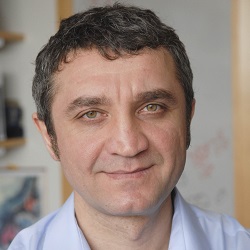 PITTSBURGH – Ruslan Medzhitov, Ph.D., a researcher who transformed our understanding of how the immune system detects infections, which paved the way for therapies for a wide range of diseases, will receive the 2019 Dickson Prize in Medicine, the University of Pittsburgh School of Medicine’s highest honor. The prize is awarded annually to an American biomedical researcher who has made significant, progressive contributions to medicine. The award consists of a specially commissioned medal, a $50,000 honorarium, and an invitation to present the keynote lecture during the University’s annual campus-wide showcase of scientific research.
“It is difficult to overstate the impact that Ruslan’s work has had in how we perceive the role of the immune system in health and disease,” said Arthur S. Levine, M.D., Pitt’s senior vice chancellor for the health sciences and John and Gertrude Petersen Dean of Medicine. “We are beginning to recognize that the immune system is intimately linked to almost every human disease, and his discoveries have contributed significantly toward that understanding.”
“I feel extremely honored to receive this prestigious award,” said Medzhitov, who is Sterling Professor of Immunology at Yale University School of Medicine and a Howard Hughes Medical Institute investigator. “None of this would be possible without my incredible mentors and trainees who I have been fortunate to work with.”
In 1997, Medzhitov, together with his mentor at Yale, the late Charles A. Janeway Jr., M.D., discovered a protein on the cell’s surface called Toll-like receptor 4 (TLR4) and demonstrated its role in activation of an immune response. This discovery proved to be the “missing link” of molecular pathways that connect the body’s recognition of a pathogen to its defensive response.
He also is credited with many fundamental discoveries concerning the broader importance of Toll-like receptors in controlling adaptive immunity, infections, chronic inflammation and tumor growth. Following these advances, drugs are actively being developed to target these Toll-like receptors in hopes of treating cancer, sepsis and inflammatory disease, among others.
Medzhitov will accept the award during Science 2019--Question, the region’s preeminent showcase of the latest research in science, engineering, medicine and computation, which will be held from Oct. 17 to 19 in Pittsburgh. He will deliver the Dickson Prize in Medicine Lecture on Thursday, October 17, as the opening plenary session.
Medzhitov was born in Tashkent, Uzbekistan, and earned a B.S. at Tashkent State University before completing a Ph.D. in biochemistry at Moscow University in 1990. He performed his postdoctoral studies at Yale University Medical School.
Medzhitov has been elected to the National Academy of Sciences, the National Academy of Medicine, and the Russian Academy of Science, and is a fellow of the American Association for the Advancement of Science. In 2010, he received the prestigious Lewis S. Rosenstiel Award for Distinguished Work in Basic Medical Research for elucidating the mechanisms of innate immunity. His numerous other awards include the 2011 Shaw Prize in Life Science and Medicine and the Vilcek Foundation, Lurie, and Else Kröner Fresenius Stiftung Prizes, all in 2013. PHOTO INFO: (click image for high-res version)