PITTSBURGH– Radiation can be a powerful cancer therapy, but it doesn’t work for everyone. A new study identifies tumor features linked with resistance to radiotherapy, an important advance toward developing individualized cancer treatments.

In the study, published today in Nature Communications, a team led by UPMC Hillman Cancer Center researchers used mouse and lab-based human cell experiments to pinpoint mutations in two genes that drive radiation resistance in head and neck tumors and identified a drug that rendered resistant cancer cells sensitive to radiotherapy. In the future, treatments could be tailored to patients with specific tumor types to improve responses to radiotherapy.

“Each year, radiation cures a huge number of patients with solid tumors, but precision radiotherapy is, unfortunately, an understudied area,” said senior author Heath Skinner, M.D., Ph.D., radiation oncologist at UPMC Hillman and associate professor of radiation oncology at the University of Pittsburgh School of Medicine. “The goal of this study was to link tumor genomics with response to radiation to figure out how we can make radiotherapy work better for patients.”

Radiation uses intense energy to destroy tumors by damaging DNA in actively dividing cells, mostly targeting cancer cells, which divide more rapidly than healthy cells. For patients who don’t respond to radiotherapy, a drug called cisplatin, which was first approved in the U.S. in the 1970s, can make tumors sensitive to radiation, but this one-size-fits-all treatment isn’t always effective and can be highly toxic. 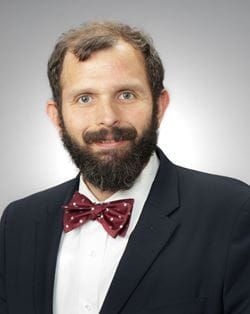 With the aim of developing more tailored approaches to enhance radiotherapy outcomes, Skinner and his team developed a technique to quickly screen head and neck cancer tumors to identify genetic targets linked with resistance to radiation. After generating tumors in mice, the researchers treated the animals with radiation and measured tumor growth. They found that inhibiting proteins called CBP and p300 dramatically increased tumor sensitivity to radiation and improved mouse survival, but only when tumors had certain mutated versions of these proteins, indicating that these mutations may drive radiotherapy resistance.

CBP and p300 are histone acetyltransferases, a type of protein that adds an acetyl chemical group to proteins at specific times. According to Skinner, in cells with mutated proteins, this process is disrupted.

“This has profound implications for the cell,” he added. “The mutated proteins jumpstart DNA damage repair, which makes cells more resistant to radiation because radiation kills cells by causing DNA damage.”

But these mutations can also be an Achilles heel, the researchers found.

“It’s like the cells are addicted to the mutated proteins for DNA damage repair,” explained Skinner. “So, when that function is removed, those cells are even more susceptible to radiation than cells that lack the mutation.”

When the team inhibited the acetyltransferase function of these mutated proteins with drugs currently in development for clinical use, radiotherapy was far more effective at killing tumor cells than those with wild type, or non-mutated, versions of the protein. This lab-based experiment suggests that this class of drugs could improve radiotherapy response in patients harboring this specific type of mutation — but this remains to be tested.

To explore whether the discovery could have clinical relevance, the researchers examined a database of patients with head and neck cancer as well as lung and cervical cancer, which can harbor the same mutations. Of patients who received radiotherapy, those whose tumors had mutations in genes that encode CBP or p300 had lower survival rates than those patients whose tumors did not, an important clue that the mutations relate to radiation resistance in patients.

According to Skinner, the next step is to build a library of mutations linked with resistance to radiotherapy. To build this library, they will study other types of mutations that could drive radiotherapy resistance in different ways. They also plan to expand their analysis beyond head and neck cancers to see whether these mutations have similar effects in other tumors.