PITTSBURGH – An international team of researchers, including several at the University of Pittsburgh, has connected more than 200 genetic snippets with the development of specific areas of the face.
The work, appearing in the journal Nature Genetics and publicly available on bioRXiv, may offer insights into the causes of facial malformations, the evolutionary origins of the human face and forensic reconstruction.
“The face tells the outside world about your identity, who you are related to, where your ancestors come from and even your health,” said lead author Julie White, Ph.D., who completed this research for her doctoral degree in anthropology at Penn State University. “But we know only a fraction of how faces are formed. The facial structure comes together in early development, and if it doesn't go right, you can get a cleft palate or other problem, but we don't fully know what controls those processes.”
In this study, the team found that many of the genes involved in creating typical facial features were the same as those implicated in facial malformations. 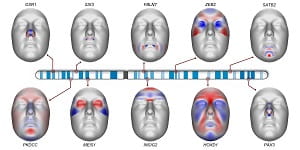 “In many cases, the overlap was striking,” said study co-author Seth Weinberg, Ph.D., co-director of the Center for Craniofacial and Dental Genetics at the Pitt School of Dental Medicine. “We know which genes are involved in many syndromes where the face is affected in specific ways. We now see those same genes impacting the same facial features in the general population, but the effect is more subtle.”
The researchers used 3D facial photographs and DNA from more than 8,000 people in the U.S. and the U.K. To transform the photographs into a data set the team could analyze, they overlaid each face with a fine grid that was digitally pushed and pulled to conform to the facial contours of each individual, like a stretchy mask. The points on the grid were then simplified into a set of “features” describing key aspects of facial shape, using the statistics of the data as a guide.
By searching for statistical relationships between about 7 million genetic variants and dozens of facial features, the team identified 203 segments of DNA associated with different aspects of human facial shape, 53 of which have never before been implicated in facial development or malformations.
“This is the culmination of many years of work and a great example of how bringing together experts from diverse fields can lead to major scientific advances,” Weinberg said. “But we are likely only scratching the surface. Understanding how all these genes operate during development to build faces remains a significant challenge.”
Other participating institutions include Katholieke Universiteit Leuven, Stanford University School of Medicine, Indiana University, Purdue University, University of Cincinnati, Wake Forest School of Medicine and Cardiff University.
Funding for this work was provided by the National Institute of Dental and Craniofacial Research, National Human Genome Research Institute, National Institute of Justice, Department of Defense, Procter and Gamble, March of Dimes Foundation, Howard Hughes Medical Institute, Fonds Wetenschappelijk Onderzoek, Science Foundation of Ireland, U.K. Medical Research Council and the Burroughs Wellcome Fund. PHOTO INFO: (click image for high-res version)

CAPTION: Figure showing selected locations on Chromosome 2 associated with facial shape. Each face shows the likely candidate gene at the specified chromosome location and its observed effect on facial shape displayed as a color-coded heat map. Red indicates regions of the face moving in an outward direction and blue indicates regions of the face moving in an inward direction.  Adapted from: White J and Indencleef K, Insights into the genetic architecture of the human face, via Figshare, CC BY 4.0, https://doi.org/10.6084/m9.figshare.c.4667261.v6.  Butler MG, Rafi SK, Manzardo AM, Gavulic L (illustration), CC BY 4.0, via Wikimedia, https://commons.wikimedia.org/wiki/File:Human_chromosome_02_from_IJMS-16-06464_no_text.png.