​Researchers Make Surprising Discovery About How Neurons Talk to Each Other

Main Content
PITTSBURGH, Aug 17, 2017 – Researchers at the University of Pittsburgh have uncovered the mechanism by which neurons keep up with the demands of repeatedly sending signals to other neurons. The new findings, made in fruit flies and mice, challenge the existing dogma about how neurons that release the chemical signal dopamine communicate, and may have important implications for many dopamine-related diseases, including schizophrenia, Parkinson’s disease and addiction.
The research conducted at Pitt and Columbia University was published online today in the journal Neuron.
Neurons communicate with one another by releasing chemicals called neurotransmitters, such as dopamine and glutamate, into the small space between two neurons that is known as a synapse. Inside neurons, neurotransmitters awaiting release are housed in small sacs called synaptic vesicles.
“Our findings demonstrate, for the first time, that neurons can change how much dopamine they release as a function of their overall activity. When this mechanism doesn’t work properly, it could lead to profound effects on health,” explained the study’s senior author Zachary Freyberg, M.D., Ph.D., who recently joined Pitt as an assistant professor of psychiatry and cell biology. Freyberg initiated the research while at Columbia University.
When the researchers triggered the dopamine neurons to fire, the neurons’ vesicles began to release dopamine as expected. But then the team noticed something surprising: additional content was loaded into the vesicles before they had the opportunity to empty. Subsequent experiments showed that this activity-induced vesicle loading was due to an increase in acidity levels inside the vesicles.
“Our findings were completely unexpected,” said Freyberg. “They contradict the existing dogma that a finite amount of chemical signal is loaded into a vesicle at any given time, and that vesicle acidity is fixed.”
The team then demonstrated that the increase in acidity was driven by a transport channel in the cell’s surface, which allowed an influx of negatively charged glutamate ions to enter the neuron, thus increasing its acidity. Genetically removing the transporter in fruit flies and mice made the animals less responsive to amphetamine, a drug that exerts its effect by stimulating dopamine release from neurons.
“In this case, glutamate is not acting as a neurotransmitter. Instead it is functioning primarily as a source of negative charge, which is being used by these vesicles in a really clever way to manipulate vesicle acidity and therefore change their dopamine content,” Freyberg said. “This calls into question the whole textbook model of vesicles as having fixed amounts of single neurotransmitters. It appears that these vesicles contain both dopamine and glutamate, and dynamically modify their content to match the conditions of the cell as needed.”
In the future, the team plans to look more closely at how increases in vesicle acidification affect health. A number of brain diseases are characterized by abnormal dopamine neuron signaling and altered levels of the neurotransmitter.
“Since we have demonstrated that the balance between glutamate and dopamine is important for controlling the amount of dopamine that a neuron releases, it stands to reason that an imbalance between the two neurotransmitters could be contributing to symptoms in these diseases,” said Freyberg.
Funding was provided by National Institutes of Health grants GM007628, DA031241, DA022413, DA12408, DA007418, DA010154, MH086545, MH108186, NS075222, NS075572, AG08702, DA040443, MH076900, ES015747 and ES016732; Louis V. Gerstner, Jr., Scholars Program; Leon Levy Foundation; John F. and Nancy A. Emmerling Fund of The Pittsburgh Foundation; Lieber Center for Schizophrenia Research and Treatment; JPB and Parkinson’s Disease Foundations; Harold & Leila Y. Mathers Charitable Foundation; Dana Foundation; Gatsby Initiative in Brain Circuitry; New York Presbyterian Seizure Disorders Fund; Brain and Behavior Research Foundation; and the UCLA Brain Research Institute
Additional authors on the study are: co-lead authors Jenny Aguilar, B.A., of Vanderbilt University, and Matthew Dunn, Ph.D., of Columbia University; Zachary Farino, and Robin Freyberg, Ph.D., of Pitt; Susana Mingote, Ph.D., Caline Karam, Ph.D., Mark Sonders, Ph.D., Se Joon Choi, Ph.D., Yuchao Zhang, Ben Choi, Ph.D., Jorge Flores, Eugene Mosharov, Ph.D., Jonathan Javitch, M.D., Ph.D., David Sulzer, Ph.D., Stephen Rayport, M.D., Ph.D., Dalibor Sames, Ph.D., all of Columbia University; Anna Grygoruk, Ph.D., and David Krantz, M.D., Ph.D., both of the University of California, Los Angeles; and Carolina Cela, Ph.D., and Brian McCabe Ph.D., both of the École Polytechnique Fédérale de Lausanne, Switzerland. 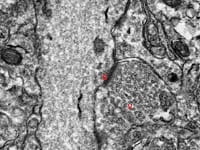 A sample image of mouse brain tissue obtained using transmission electron microscopy showing the synapse (S) between two neurons. Vesicles (V) containing neurotransmitters are waiting to be released in one of the neurons.