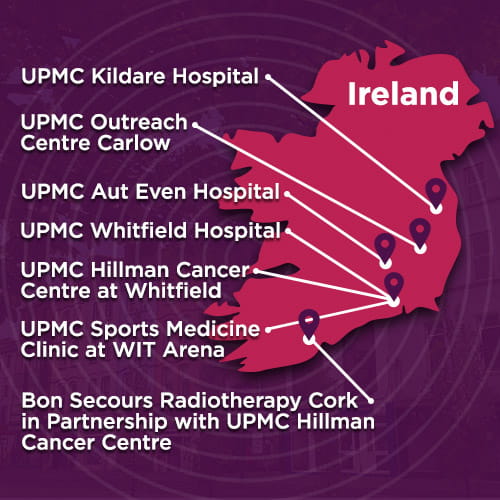 Situated in Waterford, UPMC Whitfield Hospital is the largest private hospital in the South East of Ireland, serving a half million people primarily in five counties. The hospital provides clinical care across a range of specialties, including orthopaedic surgery, urology, and cardiology. Previously known as Whitfield Clinic, UPMC Whitfield Hospital entered into the UPMC family in 2018 and serves as a solid foundation for the continued growth of high-quality health care services throughout the country.

In 2019, UPMC Kildare Hospital became a part of UPMC in partnership with the Institute of Eye Surgery (IOES), the largest ophthalmology service in Ireland. Together, UPMC and IOES will create a national Ophthalmology Network of Excellence with connections to UPMC’s cutting-edge vision research and clinical trials under the leadership of Dr. José-Alain Sahel, a world-renowned expert in efforts to prevent and cure blindness. A wider range of specialties will also be available at UPMC Kildare Hospital, including orthopaedics, pediatrics, urology, and general surgery, for residents in the Midlands region of the country.

With locations at UPMC Whitfield Hospital in Waterford and Bon Secours Hospital in Cork, UPMC Hillman Cancer Centre brings cutting-edge cancer treatments to southern Ireland and beyond. Patients are supported by a connected team of cancer experts in the U.S., Ireland, and Italy who use the latest medical equipment and technology to create tailored treatment plans that work for each unique case. Many of our cancer treatment facilities have achieved accreditation by the Joint Commission International, including our location in Waterford, which opened its doors in 2006 and has sustained accreditation since 2008.

UPMC's location in Cork, Bon Secours Radiotherapy Cork in partnership with UPMC Hillman Cancer Centre, combines the expertise of Ireland's largest independent health care provider, Bon Secours, with UPMC's world-renowned model of cancer care. Opened in 2019, the facility offers one of the most advanced stereotactic radiosurgery systems available in this region of the country.