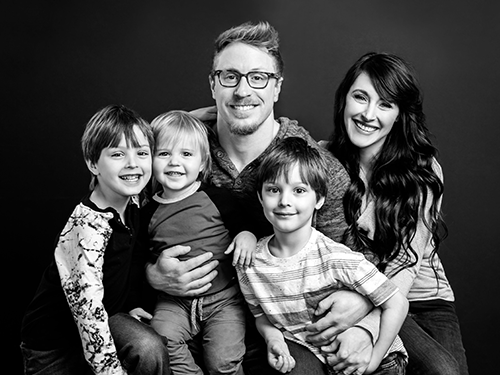 Rachel Lendyak-Peters remembers that day in April 2011, happily chatting with her husband, Ryan Peters, on their way to UPMC Magee-Womens Hospital.

Rachel was 15 weeks into her first pregnancy, carrying identical twin boys who were due in October. She’d chosen Midwives at Magee for prenatal care, labor, and delivery and was going there for a routine prenatal exam.

A Life or Death Decision

But her ultrasound results that day were anything but normal. Rachel suddenly faced a life or death decision for her babies — and she was scared.

Thankfully, the Fetal Diagnosis and Treatment Center at UPMC Magee has leading national and international experts in preterm birth and high-risk pregnancies.

When twin fetuses share the same placenta, problems can occur in connecting their blood vessels. This can cause one twin to get too much blood and the other not to get enough.

Without treatment, 70 to 80 percent of twins with TTTS won’t survive.

Suspecting TTTS, the midwives sent Rachel to Dr. Emery, who confirmed the diagnosis. He assured Rachel that the babies were fine — but she needed in utero surgery right away.

“There’s just something about Dr. Emery,” says Rachel. “He was calm and confident as he explained the procedure and its success rates, and I trusted him completely.”

After surgery, Rachel made weekly trips from her Verona, Pa., home to UPMC Magee in Oakland. Dr. Emery wanted to keep a close eye on the twins’ condition and growth.

When an ultrasound at 22 weeks showed that TTTS had returned, Dr. Emery did a second laser ablation surgery in utero.

Born early at just 28 weeks, the boys spent two months in the neonatal intensive care unit. Now eight years old, they're curious, kind, and thoughtful third-graders who are into jujitsu, playing the piano, and soccer.

A Second Time Around

As a first-time mom with twins, Rachel had little time to reflect on her emotionally tough first pregnancy and birth experience.

But five years later — expecting the birth of her third son — she soon realized how deeply it had affected her.

“When I got pregnant with Weston, I went to the Midwives at Magee again. But I found myself worrying non-stop about having problems like my first pregnancy,” says Rachel. “I constantly asked if they should do weekly ultrasounds to be sure he was okay.

“Learning to trust that my body could do this was a really big adjustment,” she adds. “The midwives were very reassuring. They never made me feel like my feelings weren’t valid or important.”

Because Weston was a big baby, though, the midwives advised Rachel that she might need to have a C-section. She asked to talk to Dr. Emery since they had formed a close relationship and kept in touch by phone and email.

Dr. Emery confirmed Rachel needed a C-section and offered to do the procedure.

“It was such a huge relief knowing he would be there to deliver Weston,” says Rachel. “He held my hand throughout pre-op because he knew I was terrified.”

To Rachel, Dr. Emery is surely a superhero.

“He worked very hard to get all three of my babies into the world. I’ll always be grateful for all he did for our family,” Rachel says.