Prior to becoming dean, Dr. Kroboth’s interests ranged from determining the causes of variability in drug response in people to the study of pharmacokinetics and pharmacodynamics, branches of pharmacology that focus on drug metabolism and their effects on the body. Since becoming dean, she has focused efforts on improving medication-based care.

Among Dr. Kroboth’s many honors are appointments to fellowship in the American College of Clinical Pharmacy and the American Association of Pharmaceutical Scientists.

Dr. Kroboth received both her doctorate and her master’s degree in pharmacy from the University of Pittsburgh. 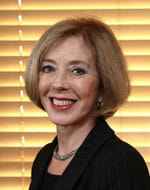