Dr. Badylak’s team is studying extracellular matrix (ECM), the body’s natural scaffold for cells that provides the site-specific environment needed for healthy growth and function. At injury sites, ECM appears to release biochemical signals that encourage tissue to regenerate rather than heal with scar tissue. In a case that received much media attention, a model-plane hobbyist who lost his fingertip to a propeller applied ECM powder to the wound and his fingertip grew back. Also, a layer of ECM was used to successfully re-grow the esophageal lining of a patient whose own tissue had to be removed due to early-stage esophageal cancer.

Currently, ECM is being tested in clinical trials in the Armed Forces Institute for Regenerative Medicine, a military-sponsored consortium of several centers that aims to find new treatments for wounded warriors. The material will soon be tested in another study, sponsored by the U.S. Department of Defense Office of Technology Transition, that will include soldiers and civilians who have lost large amounts of muscle due to trauma.

Dr. Badylak and his work have been featured on 60 Minutes, CBS News, Esquire, Newsweek online and science programs on Discovery Channel, History Channel and by other print and broadcast outlets.

Dr. Badylak received his veterinary degree and his doctoral degree in anatomic pathology from Purdue University, and received his medical degree from Indiana University Medical School. 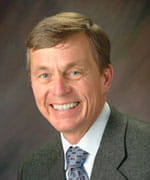