Victor O. Morell, MD, who joined UPMC Children's Hospital of Pittsburgh as chief of the Division of Pediatric Cardiothoracic Surgery in 2004, is a skilled surgeon, administrator, researcher and educator. In May 2011, Dr. Morell was appointed co-director of the UPMC Heart and Vascular Institute, He also serves as Vice Chair and Director of Cardiovascular Services for the Department of Cardiothoracic Surgery.

He was recruited from Children's Hospital of Tampa, Fla., where he served as Chief of Pediatric Cardiothoracic Surgery and Director of the Pediatric Cardiac Intensive Care Unit from 2000 to 2004. Under his leadership, the pediatric cardiovascular program became the largest in Florida.

In the laboratory, Dr. Morell is co-investigator of a National Institutes of Health-funded research initiative to develop an implantable ventricular assist device suitable for use in infants and children. He also is involved in clinical studies related to pediatric cardiothoracic surgery with expertise in the management of complex transposition of the great arteries with a ventricular septal defect and pulmonary stenosis.

Dr. Morell earned a bachelor's degree in biochemistry from Purdue University and earned his medical degree from the Ponce School of Medicine, Ponce, Puerto Rico. He completed his surgical residency at Robert Packer Hospital-Guthrie Clinic in Sayre, Pa., where he was chief surgical resident in his final year. He completed his cardiothoracic residency at the University of Massachusetts Medical Center. He also completed fellowships in cardiothoracic surgery at Children's Hospital Boston and at the Great Ormond Street Hospital for Sick Children in London, England, before joining the medical staff at Children's Hospital of Tampa. In Tampa, Dr. Morell received the Pediatric Specialist of the Year award in 2001.

He has published more than two dozen peer-reviewed manuscripts in scientific journals and has presented numerous abstracts at national meetings. Dr. Morell is board-certified in general surgery, thoracic surgery, and congenital heart surgery. 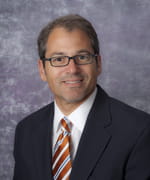