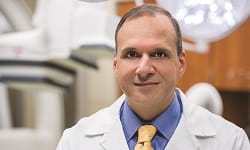 PITTSBURGH – Samir Saba, M.D., has been appointed co-director of the UPMC Heart and Vascular Institute and chief, Division of Cardiology, University of Pittsburgh School of Medicine.
Specializing in cardiac electrophysiology, Saba was recruited to Pitt in 2000 and has been directing electrophysiology at UPMC since 2005. His work focuses on cardiac resynchronization, the development and use of implantable cardiac devices and the treatment of cardiac rhythm abnormalities. Saba has more than 200 research publications, as well as three patents for inventions in the field of cardiac electrophysiology.
“The UPMC Heart and Vascular Institute and the University of Pittsburgh Division of Cardiology have a longstanding tradition of excellence in innovation, clinical care, education and research,” said Saba. “I am excited and honored to lead this incredibly talented team of physicians and scientists as we work together to advance the cardiovascular field and provide the highest quality care to our patients in the Pittsburgh region and beyond.”
In addition to his clinical work and research, Saba has served on the editorial boards of Circulation and Heart Rhythm, two of the leading academic journals in the fields of cardiology and electrophysiology. He also is a dedicated teacher and career development mentor for electrophysiology and cardiology physicians, fellows, medical residents and medical students.
“During Samir’s time at Pitt and UPMC, his commitment to excellence in all aspects of care, education and research has enriched the department, and we are confident that his dedication to the field of cardiology will inspire and invigorate the division going forward,” said Steven Shapiro, M.D., executive vice president and chief medical and scientific officer of UPMC and president, Health Services Division.
A native of Lebanon, Saba received his undergraduate and medical degrees at the American University of Beirut. He continued his education at Tufts University, completing his postgraduate training in internal medicine, cardiology and electrophysiology.
Saba succeeds Joon Sup Lee, M.D., who was named chief medical officer of the UPMC Insurance Services Division last month.

CAPTION: Samir Saba, M.D., co-director of the UPMC Heart and Vascular Institute and chief, Division of Cardiology, University of Pittsburgh School of Medicine