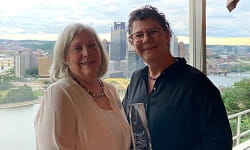 PITTSBURGH – UPMC Hillman Cancer Center chief operating officer and vice president, Stephanie Dutton, has received the distinguished Susan G. Komen Greater Pennsylvania Terri L. Chapman Award.
Dutton has been involved in the Komen organization since the early 2000’s and has served on the Komen Greater Pennsylvania Board for the past six years.
“Stephanie was chosen for this award due to her hard work and dedication to cancer patients and survivors throughout our affiliate area,” said Kathy Purcell, chief executive officer of Susan G. Komen Greater Pittsburgh. “She has contributed so much of her time and talent to the fight against breast cancer and exemplifies the leadership standards set by Terri Chapman during her lifetime.”
The award was presented to Dutton during the Komen Celebration of the Promise event held in Pittsburgh on June 13.
“My work in cancer care and at UPMC Hillman Cancer Center allows me to play a small part in the work to advance breast cancer research and provide quality patient care from an administrative standpoint,” said Dutton. “I am in awe of our team and our partnership with Komen Greater Pennsylvania as we work together to bring awareness to this disease.”
The Chapman award, established in 2010, is presented to individuals who demonstrate leadership qualities, impact and influence decision makers, and who support Susan G. Komen Greater Pennsylvania.

The award is named in honor and memory of Terri Chapman, a long-time leader of the Board of Directors of Komen Pittsburgh, who was instrumental in establishing Pittsburgh’s full affiliation with Susan G. Komen, an organization with a $2 million annual operating budget, serving people within a 53-county area in Pennsylvania.