PITTSBURGH – In the weeks immediately after giving birth, Black mothers with hypertensive disorders have a less rapid decline in blood pressure than white women—an important finding in trying to understand why Black women are more likely to die from pregnancy-related complications, according to new research from scientists at the University of Pittsburgh School of Medicine and UPMC Magee-Womens Hospital.
Reported today in JAMA Network Open, these findings are the first to show this race-related difference in a large cohort of women who were tracked in the six weeks after giving birth. 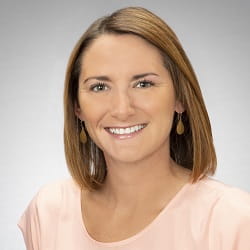 “We know Black women are at increased risk of hypertensive disorders of pregnancy, and we know this contributes to the higher morbidity and mortality rates as compared to white women,” explained Alisse Hauspurg, M.D., assistant professor at the Pitt School of Medicine and a Maternal-Fetal Medicine specialist at UPMC Magee. “Understanding the trajectory of blood pressure decline after a hypertensive disorder of pregnancy might be important to preventing these complications.”
Hypertensive disorders, such as preeclampsia and gestational hypertension, occur in 10-20% of pregnancies in America. Women who experience these disorders often continue to have high blood pressure after delivery, which can increase the risk of seizures, strokes and even maternal death.
Hauspurg and colleagues enrolled 1,077 women who had a hypertensive disorder during pregnancy into UPMC Magee’s remote blood pressure monitoring program. The program provides women with a blood pressure cuff and prompts them to take their own blood pressure and heart rate readings via an app, which automatically enters the numbers into the patient’s electronic medical records. The tracking rapidly detects concerning trends in postpartum women before their situation becomes critical.
Study participants contributed 17,146 blood pressure readings in the first six weeks postpartum. Researchers found blood pressure decreases rapidly in the first three weeks after birth and then stabilizes. However, a substantial proportion of women still have high blood pressure six weeks postpartum.
Compared with white women, Black women have a less rapid decline in blood pressure postpartum, resulting in higher blood pressure by the end of the six-week program. At that point, 68% of Black women met criteria for stage 1 or stage 2 hypertension compared with 51% of white women. The findings have implications for addressing postpartum maternal morbidity and mortality—two to three times higher for Black women—as well as longer-term cardiovascular health.
Hauspurg explained one limitation to the study is the remote monitoring program concluded at six weeks postpartum. Researchers are interested in future studies that look at the blood pressure trajectories beyond this time period.
“Our study supports the use of remote monitoring for our high-risk patients. It’s critical we catch a potential crisis through a safe, effective and convenient mobile format versus seeing our patients in the emergency room,” said Hyagriv Simhan, M.D., executive vice chair of obstetrical services at UPMC Magee.
The remote monitoring platform integral to the program was supplied by Vivify Health. UPMC was an investor in Vivify at the time of the study. PHOTO INFO: (click image for high-res version)