PITTSBURGH, March 11, 2015 – Nearly seven years after he last played here in the Stanley Cup Finals with the Penguins, Gary Roberts is returning to Pittsburgh as the name, face and attitude of the Sports Performance Center at the UPMC Lemieux Sports Complex in Cranberry.
Roberts, 48, will oversee the philosophy and off-ice training regimen at a Sports Performance Center that, while straddling both rinks at the complex, will focus on hockey but encompass athletes of every sport. He also will consult with the full-time UPMC staff who, along with him, will work personally with players from every echelon of hockey – professional, collegiate, junior, youth (including the Pittsburgh Penguins Elite) – as well as athletes of all ages and levels, including a morning program for business executives. 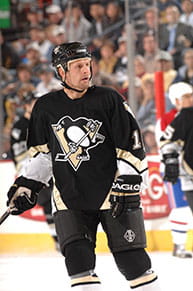 The UPMC Lemieux Sports Complex is scheduled to open its doors in August as the Penguins’ practice  home, a community hockey and sports development, and a public sports medicine facility with 24 exam  rooms, physical therapy areas, imaging and more.

“I love the city and the fans of Pittsburgh,” said Roberts, whose agreement with UPMC Sports Medicine   calls for him to coordinate, lead and work at the Sports Performance Center in Cranberry. “These are  philosophies I honed during my career and afterward. I’m thrilled to team up with UPMC to bring  philosophies and programs that we’ve put in place to train, develop and mentor athletes from the youth  levels all the way to the professional ranks.”

Since last playing in the NHL with Tampa Bay in 2008-09 following his two Penguins seasons, Roberts  has been sharpening and refining his techniques in his native Toronto with the Gary Roberts High Performance Centre, which he will continue to operate. He was a natural fit for the trailblazing, hybrid complex bearing the name of his friend and former team’s co-owner, Mario Lemieux.

"We are pleased to have Gary Roberts join the sports medicine staff at the UPMC Lemieux Sports Complex as we work with athletes of all ages and skill levels to maximize performance and minimize injury,” said Vonda Wright, M.D., medical director of the complex. “Our focus is not only on skills to carry onto the ice but total body preparation."

“This is a great step forward for the UPMC Lemieux Sports Complex,” added David Morehouse, CEO and President of the Pittsburgh Penguins. “Gary’s expertise in sports performance training and nutrition is well-known within the hockey community, and his presence here will be a benefit for everyone from youth hockey players to elite NHL prospects. It will help to make this facility a destination point for world-class events and training – in hockey and all sports.”

Late in his career, Roberts was acknowledged by teammates and opponents to possess the fitness and body of a player half his age. Roberts, who entered the NHL as a first-round draft pick of the Calgary Flames in 1984, provided a physical and emotional presence as well as a scoring touch in amassing 438 goals, 910 points and 2,560 penalty minutes in a 1,224 regular-season game career with Calgary, Carolina, Toronto, the Penguins and the Lightning. He scored 28 points in 57 regular-season games with the Penguins in 2006-07 and 2007-08, then added four goals and eight points in 16 total playoff games during that time – between the ages of 40 and 42.