As UPMC Grows, So Does Its Impact

UPMC serves as a powerful engine of progress, growth, and prosperity. As a neighbor Pennsylvania can depend on, UPMC goes far beyond the traditional definitions of health care to deeply enhance the health and well-being of the many places we call home.

UPMC’s operations have a multiplier effect that ripples benefits through local economies. Every dollar directly spent by UPMC results in more than twice as much impact. UPMC makes up 28 percent of the statewide total impact by hospitals.

UPMC accounts for one in four hospital jobs statewide.

As a nonprofit organization, UPMC contributes substantial amounts each year in the form of taxes and assessment fees, including property taxes, sales taxes, income taxes, and employer taxes. In 2017, UPMC paid:

Exhibiting Good Citizenship and Fulfilling a Mission of Service

UPMC provides more than $1 billion per year in benefits to the communities it serves, and delivers more care to the region’s poor and underserved than any other health system in the state.

UPMC is making care accessible to individuals and families who are uninsured or underinsured.

Thousands of patients each year qualify for financial assistance, where UPMC partially or completely waives payment for medical services. In 2018, UPMC provided $87 million in charity care.

UPMC calculates and reports its charity care costs each year, according to Internal Revenue Service guidelines. The reported amounts are UPMC’s actual costs, not the price or charges that would have been billed for the care.

UPMC subsidizes programs that care for vulnerable populations — $301 million in Medicaid and $517 million in Medicare. In many cases, government programs do not pay UPMC for the full cost of care. When this occurs, UPMC makes up the difference — underwriting the costs that Medicaid and Medicare do not cover.

A $21 billion health care provider and insurer, Pittsburgh-based UPMC is inventing new models of patient-centered, cost-effective, accountable care. The largest nongovernmental employer in Pennsylvania, UPMC integrates more than 90,000 employees, 40 hospitals, 700 doctors’ offices and outpatient sites, and a 3.8 million-member Insurance Services Division, the largest medical insurer in western Pennsylvania. In the most recent fiscal year, UPMC contributed $1.2 billion in benefits to its communities, including more care to the region’s most vulnerable citizens than any other health care institution, and paid $587 million in federal, state and local taxes. Working in close collaboration with the University of Pittsburgh Schools of the Health Sciences, UPMC shares its clinical, managerial and technological skills worldwide through its innovation and commercialization arm, UPMC Enterprises, and through UPMC International. U.S. News & World Report consistently ranks UPMC Presbyterian Shadyside on its annual Honor Roll of America’s Best Hospitals and ranks UPMC Children’s Hospital of Pittsburgh on its Honor Roll of America’s Best Children’s Hospitals. For more information, go to UPMC.com. 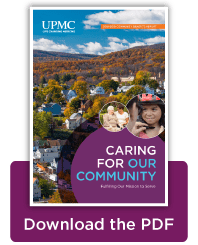