Growing up in Johnstown, weight wasn’t much of an issue for Tonya Lightcap, a former high school varsity volleyball player. But during college and as a young adult, the pounds slowly edged upward. After marriage and the birth of her boys 20 months apart, her weight reached 195.

“That’s when the weight really started piling on,” says Tonya, who gained another 40 pounds over the next four years until she topped out at 235 — a formidable amount for her 5-foot, 5-inch frame to carry.

In 2014, Tonya learned she had a fatty liver while undergoing a CT scan to check for kidney stones. During a checkup, her doctor urged her to make lifestyle changes after her BMI (body mass index) reached a concerning 39.1.

“I felt awful — physically and emotionally,” says Tonya. “I was tired all the time and I felt bad about myself.”

Desperate to take control, she tried diets, exercise, and weight loss plans, but nothing worked. On one weight loss program, she managed to lose just six pounds in three months, only to see the scale go back up again.

“This was a last resort,” says Tonya. “I needed help: I didn’t want to be overweight the rest of my life.” After researching procedures and asking questions, she made an appointment with the Minimally Invasive Bariatric and General Surgery Program at UPMC Magee-Women’s Hospital.

A New Lease on Life 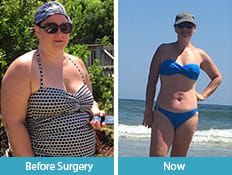 Since her surgery, Tonya’s weight has dropped to 145 pounds and her BMI is now a healthy 24. She maintains her 90-pound weight loss by following a healthy, protein-rich diet, taking vitamin supplements, and staying active. She exercises regularly — including long walks and fitness and yoga classes — and enjoys running around and playing soccer with her boys.

Getting back into size 6 clothes was a huge accomplishment for Tonya. In fact, she now fits into her favorite jeans from high school and even wore a bikini at the beach.

“When I look in the mirror now, it’s hard to believe it’s me. And I never dreamed I’d be in a bikini again!” she says.

But the best milestone came six months after her surgery when Tonya was able to wear her wedding and engagement rings again. She had worn them on a necklace since the birth of her oldest son in 2008.

“I felt naked without my rings for all those years. It was a huge deal for me to wear them again,” says Tonya.

“Surgery wasn’t easy, but it was worth it. I’m so happy and I feel so much better about myself.”