Following an architectural design competition open to the world's top firms, UPMC has unveiled design plans for three new hospitals that will enhance the cityscapes of Pittsburgh’s Uptown, Oakland and Shadyside neighborhoods, while radically transforming care for its patients. 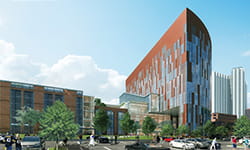 Designed by HOK, this facility will cater to patients in need of physical rehabilitation and those with vision impairments. 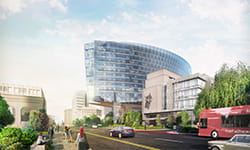 Designed by HGA, this hospital will build on UPMC's legacy of disrupting transplantation and cardiac care. 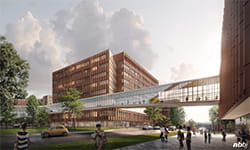 Designed by NBBJ, this hospital will provide a critical link between a patient's cancer care and the science behind it.

UPMC already provides customized care to those who need it most. Learn about UPMC's three existing specialty hospitals.

A $24 billion health care provider and insurer, Pittsburgh-based UPMC is inventing new models of patient-centered, cost-effective, accountable care. The largest nongovernmental employer in Pennsylvania, UPMC integrates more than 92,000 employees, 40 hospitals, 800 doctors’ offices and outpatient sites, and a more than 4 million-member Insurance Services Division, the largest medical insurer in western Pennsylvania. In the most recent fiscal year, UPMC contributed $1.5 billion in benefits to its communities, including more care to the region’s most vulnerable citizens than any other health care institution, and paid more than $900 million in federal, state and local taxes. Working in close collaboration with the University of Pittsburgh Schools of the Health Sciences, UPMC shares its clinical, managerial and technological skills worldwide through its innovation and commercialization arm, UPMC Enterprises, and through UPMC International. U.S. News consistently ranks UPMC Presbyterian Shadyside among the nation’s best hospitals in many specialties and ranks UPMC Children’s Hospital of Pittsburgh on its Honor Roll of Best Children’s Hospitals. For more information, go to  UPMC.com.