It was the prospect of missed opportunities and a number – 300 -- that represented the breaking point for Susan Bassler of Harrisburg.

As Susan describes it, she was always a bigger person. At around 12 to 14 years old, she started putting on weight and couldn’t manage it effectively, something that continued for years. But her weight never held her back.

“I went to college and grad school,” Susan says. “I couldn’t do tons of physical things, but I could still walk however much I needed to, go camping, whatever. I even played rugby in college, in which my size and strength were beneficial.”

Eventually, the weight became oppressive. “You name the diet plan, exercise plan, medication, everything under the sun, I tried in vain attempts. I’d lose 20, gain 30. Lose 40, gain 50. Eventually I didn’t want to do as many things because of my weight.”

For Susan, who describes herself as eccentric and eclectic, with niche hobbies and interests, when she didn’t even want to foster those hobbies, it was a signal.

But 300 pounds was a tipping point.

So was the idea of going on a Caribbean cruise with her family. “Looking at the off-boat excursions, I remembered there was a weight limit for many of the more adventurous activities. I couldn’t go zip-lining in Jamaica,” Susan says.

“My soul and spirit still wanted to do those things, but my body just couldn’t.”

Susan had to get past the notion that a surgical solution wouldn’t work. “In my mind, if you’re not going to change everything, the surgery isn’t going to do anything for you,” she says. So, she did that work in addition to educating herself about surgical options and outcomes.

Susan spent a year and a half doing counseling and dealing with an unhealthy relationship with food, working to separate food from emotions. “Doing that has helped immensely,” she says. “The surgery doesn’t fix your mind.”

After researching different types of bariatric procedures, Susan chose to have gastric sleeve surgery (gastrectomy), a surgery that reduces the size of the stomach and leaves behind a tubular “sleeve.” Reducing the size of the stomach restricts the amount of food that can be consumed, making one feel fuller faster. It also reduces the amount of hunger hormones the body can produce.

Susan’s was one of the very last elective surgeries scheduled at UPMC Community Osteopathic before the COVID-19 shutdown – scheduled for March 16, 2020 with Justin Rosenberger, MD. Despite some spasming in her stomach, she had no side effects and a routine recovery.

Susan weighed 322.6 pounds at the time of surgery in March 2020. Now, two and a half years later, she weighs between 180 and 185 pounds. Maintaining this weight at her height of 5’8” is not terribly difficult, Susan says. “I am an overachiever and always want more, but my body seems to enjoy this size.”

She sees Loretta Harvey, PA-C, RD, every four to six months for follow-up appointments and labs, and everything has been perfect. Susan’s blood pressure is significantly lower since the surgery, and she’s no longer considered diabetic.

“I put the good stuff in first so I get my nutritional needs met,” she says. “What I also love about the sleeve is, I’m not as limited as far as things don’t make me sick. If I really need that peanut butter cup, I can have it. I want to be able to live life to the fullest but am doing so in moderation.”

Give Yourself a Little Grace 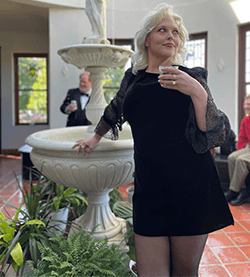 While Susan did have a routine recovery from the surgery, she says, she has had to learn more about being patient and tolerant with herself.

“I had to learn what my body wants and needs and how my body functions. It’s a completely new digestive system. Give your body a little grace while it figures everything out.”

Meanwhile, her activity and energy level, she says, are “beyond astronomical.” Susan works full-time as a disability claims adjudication supervisor, a completely sedentary job. She picked up a second job at a sporting goods warehouse where she can do 10,000 steps in a shift and spends her hours lifting and carrying – essentially functional fitness. “I have always hated doing repetitive exercise, so I knew I had to find another way to be active and move my body. This seemed like a natural fit, and I am saving money for plastic surgery procedures to continue restoring and repairing my body from the damages of a lifetime of obesity.”

One of Susan’s loves is the theater. Since losing the weight, Susan has gotten involved in improv theater, performing on three teams at a local improv theater and movie/video content creating for TV. “Who would think of that?” she says.

“Two and a half years ago, you never would have seen me in front of a camera, intentionally doing something like that.”

She also renewed her love for historical costuming and sewing and has created costumes from many time periods. She uses these when she volunteers as a living historian with several local historical societies through Perry and Juniata counties.

“You would not have seen 322-pound me trying to be the center of attention, but now, I’m there. I never imagined the life I have now, and I am going to do everything I can to maintain this loss that has led to so many positive gains!”

This patient’s treatment and results may not be representative of all similar cases.