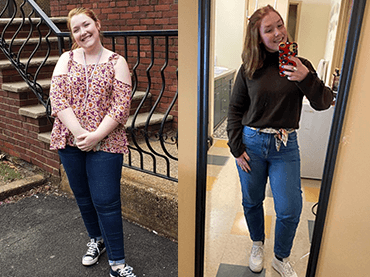 In March 2020, when COVID shut the world down, Zoey Bright of Middletown, Pa., came home from Wagner College on Staten Island, N.Y. determined to focus on her physical and mental health.

Zoey says she’d struggled with weight her whole life, and at that time in 2021, she was at her heaviest weight and feeling unhealthy. While she was a musical theater major doing fitness and dance classes and eight performances a week, Zoey says she couldn’t be the best performer because she simply couldn’t keep up with the physical requirements.

On top of that, at around the same time her grandmother passed away, and in her grief Zoey turned to emotional eating.

It was time for a change. “I had tried dieting, but it never stuck,” Zoey says. “I would get to the three-week mark and give up.”

When Zoey started seeing a nurse practitioner at the center in March 2020, she was at her highest weight, 197 pounds. Her goal was to reach 150 pounds. She was prescribed phentermine, an appetite suppressant, and stayed on it only for a couple of months to kickstart her weight loss. She saw a change immediately.

“Seeing a change at the beginning kept me motivated,” she says. “It’s not about working hardcore every day of the week. It’s a very reasonable program.”

By January 2021, 10 months after starting the program, Zoey had reached her goal weight.

She says she went back to Wagner once the COVID closures lifted and she could tell the difference in how she felt. Before, she says, she’d be on stage doing a dance number, but she’d feel out of breath and have a hard time keeping up – though she stresses she was always valued as a performer. But after the program, she says, “I could do a whole dance class and not feel tired afterwards. I’m ready to go out there and take whatever role because I’m able to sustain it.”

Zoey says the Weight Management Center helped her not only physically, but mentally. When she was carrying the extra weight, she says she was scared to put herself out there. She felt limited by her own insecurities.

“Now, I’m less insecure, and they helped me with that. I felt like my own self-worth improved too. That didn’t correlate with my losing weight; I just knew I had a support system, and I had people who were there to support me no matter what.”

This patient’s treatment and results may not be representative of all similar cases.