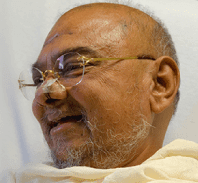 Acharya Yashovijaysuri is a spiritual leader, a guru, of the Jain religion of India.

At age 11, he became a monk, and over the years he has progressed to lead roughly 1 million followers throughout the world.

He lives a life free of material goods, and devotes his days to meditation, studies, writing, and preaching Jainist philosophy to his followers.

Foremost among Jainist principles is non-violence. For Jains, the concept of non-violence applies to all living beings—from humans to insects to microorganisms. In keeping with these beliefs, his only mode of transportation is walking. Yashovijaysuri carefully sweeps the ground before his feet to avoid injuring insects.

"I am very, very happy. After the surgery my vision has improved." — Acharya

Two years ago, the guru lost the sight in his left eye, but mentioned it to no one. When he began losing vision in his right eye, his followers became aware of his problem and insisted that he get medical treatment.

An MRI at a Mumbai hospital showed a golf-ball sized tumor pressing on the optic nerve, causing the increasing blindness. Surgeons there performed a craniotomy—the traditional surgical approach to reaching a skull base tumor—but felt that the tumor was too risky to remove because it was very fibrous and was fed by a large network of blood vessels. The tumor was a meningioma, a benign tumor that would clearly continue to grow and leave the guru completely blind. The Mumbai surgeons closed his skull after performing just a biopsy.

Schedule an Appointment or Ask a Question

Several of Yashovijaysuri's followers, led by Dr. Dinesh Mehta, a retired oncologist living in Belgium, began a quest to save the sight of their revered spiritual leader. Dr. Mehta asked dozens of European neurosurgeons where to go for a solution. The answer was always the same. Every neurosurgeon he spoke to said that neurosurgeons at UPMC were the only team capable of performing the complex surgery. The decision was difficult, since air and car travel were forbidden for the guru.

Dr. Mehta says, "First we had to convince the community of followers to permit the trip—then we asked for the blessing of our Gachapati—the high priest." Fifty-thousand followers made contributions to pay for the trip and surgery.

Dr. Mehta flew to Pittsburgh with Yashovijaysuri's scans, to be certain that he could entrust the guru's life and health to the UPMC team. Finally, surgery was arranged, and Yashovijaysuri, Mehta, and several other supporters arrived in Pittsburgh. It was the first time Yashovijaysuri had traveled by any means other than by foot.

The UPMC team planned to remove the meningioma through the nose using the endoscopic endonasal approach. The goal of the surgery was to preserve the guru's remaining sight, with the hope that perhaps some vision would return. The surgeons were able to remove more than 90 percent of the tumor. All that remained was the tumor's outer covering where it attached to the optic nerve.

With the pressure relieved, the progression of blindness was halted. Immediately after surgery Yashovijaysuri could see more with his right eye.

"I am very, very happy," says the guru. "After the surgery my vision has improved."

The surgeons expect that Yashovijaysuri will continue to regain sight over a period of six to 12 months. Ten days after his surgery, the guru returned to UPMC for his follow-up visit before returning to India. The doctors were amazed at what they found. Not only was Yashovijaysuri regaining his sight in his right eye, but he was also seeing light—for the first time in two years—with his formerly blind left eye.

Our patient stories profile a number of patients who have had minimally invasive brain surgery at UPMC. Although everyone's care experience is unique, we hope that sharing these stories will help other prospective patients and their families better understand these procedures and their potential benefits.

Acharya Yashovijaysuri's treatment and results may not be representative of all similar cases.