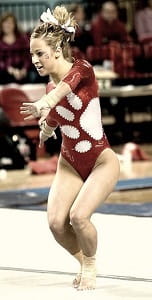 Greensburg native Taylor Seaman was a competitive gymnast for most of her life. After graduating from North Carolina State University, the former All-American accepted a job with a large cruise line as a performer. She completed two contract years and was then asked to fill in for a fellow cast member for one more year.

During the opening night performance in June 2014, Taylor was in the middle of a routine tumbling pass when something went wrong.

“I didn’t fall. I didn’t twist my ankle,” she recalled. “It wasn’t anything that made me feel like I had to drop down and immediately grab my foot. I’m still not sure what caused the injury, but when I landed, it felt like a knife went through the back of my leg.”

Taylor had lost all functionality in her foot and hobbled off the stage. Her first thought was that she tore her Achilles tendon, since she had seen two roommates in college go through the same injury. But she would have to wait until the next day, when the cruise ship docked in the Bahamas, to get an MRI.

After the MRI, her local doctor’s diagnosis confirmed what Taylor had feared: she had torn her Achilles tendon. Taylor had to make a decision: she could stay in the Bahamas and have surgery, or she could travel home.

“I knew I could get the best medical attention in Pittsburgh,” Taylor said. “Plus, I knew I’d most likely need to rehab for a while. It would be nice to do that near my family.”

The Path to UPMC: UPMC Foot and Ankle Center

She consulted her family physician, who referred her to orthopaedic surgeon MaCalus V. Hogan, MD, of the UPMC Foot and Ankle Center. He performed surgery a week later to repair her torn tendon.

Taylor had to follow up with Dr. Hogan every few weeks postoperatively. Once out of her cast, she began physical therapy in Greensburg. She wouldn’t finish the therapy until January 2015 in Miami.