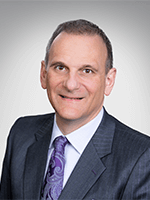 David P. Gibbons, M.H.A., R.N., is the senior vice president of the Health Services Division and the market president for Northwest Pa. and North Central Pa. regions. He was promoted to his current role in Nov. 2021 and remains president of UPMC Hamot, a position he’s held since 2017. Mr. Gibbons joined the UPMC Hamot leadership team in 2012 as the executive vice president and chief operating officer. In addition to his role at UPMC Hamot, Mr. Gibbons also served as president of UPMC Northwest in Venango County, a role he previously held between 2009 until 2012.

At UPMC Hamot, Mr. Gibbons held executive oversight of the majority of the hospital’s clinical service lines and cultivated numerous business and community partnerships which helped to enhance patient care. He was instrumental in establishing Hamot’s kidney transplant program, the first transplant program in the region and the first UPMC transplant program in the United States, outside of Pittsburgh. During his tenure, Mr. Gibbons also facilitated the expansion of ob-gyn services with the opening of the Magee-Womens Specialty Center and was instrumental in the construction of a new $111 million patient tower which was completed in 2020. It was also under his guidance, UPMC Hamot’s nursing staff achieved Magnet designation, the highest distinction a health care organization can receive for nursing excellence, as well as Centers of Excellence for Comprehensive Stroke and Comprehensive Cardiac Care Center.

While at UPMC Northwest, Mr. Gibbons directed many service lines including business and physician relationships, which include a skilled nursing facility, a behavioral health unit, and a rehabilitation unit. His other accomplishments at UPMC Northwest include improving the hospital’s operating margin, implementing electronic patient records, achieving a Level II trauma accreditation for the hospital’s emergency department, establishing telemedicine programs, and developing a comprehensive women’s health program in collaboration with UPMC Magee-Womens.

Prior to joining UPMC, Mr. Gibbons was the chief operating officer at Kennedy Health System in Voorhees, N.J. He also served as the director of managed care for the Visiting Nurses Association of Greater Philadelphia; the regional director of operations, marketing and finance for Oncology Services Inc., and director of oncology programs for U.S. Healthcare in Blue Bell, Pa.