Nicole Seal was 29 years old when she decided to take control of her life. At 368 pounds, the warning lights were flashing.

She had dangerously high blood pressure and ominously low oxygen levels. Her aching knees required regular cortisone shots, and she had painful stress fractures in her hips.

“My knees, feet, back, and hips hurt, and I was always tired,” says Nicole. “I had to do something.”

In April 2018, she had gastric bypass surgery.

Since then, Nicole has:

Weight was never a big deal to Nicole Seal, a Monongahela native. At 5 feet, 7 inches, she grew used to the scale hovering between 215 and 230 pounds.

“I was never skinny, but I was ok with that,” she says.

Then, at age 25, she took a job in a personal care home working odd hours and night shifts. The weight started piling on.

“It was so much easier to stop for fast food on my way home. I never had time to eat right or exercise regularly,” says Nicole.

Taking Control of Her Climbing Weight

As the scale climbed upward, Nicole found it increasingly hard to be active.

She tried walking and taking fitness classes with friends. But her foot and knee pain got worse.

Then she developed two separate stress fractures in her hips. Each time, she had to use a walker and take six weeks off work to allow the fractures to heal.

“That’s when I decided I needed to take control,” says Nicole. “My weight was causing stress fractures. Not exercising made things even worse.”

Nicole went through six months of preparation, including meeting with a nutritionist who taught her how to eat healthier.

She followed a high protein, no/low carb, no sugar diet and tracked her intake in a food journal. By the time of her surgery on April 3, 2018, Nicole had lost 70 pounds.

“I didn’t realize I was drinking a ridiculous amount of calories,” says Nicole. “My latte had a whole day’s worth of calories in one drink!”

Improved Health and Quality of Life 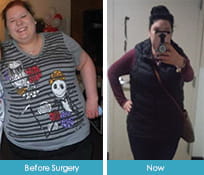 Since her surgery, Nicole has lost another 61 pounds and doesn't need two of her three blood pressure medicines.

She faithfully follows her diet. And with her foot, knee, and hip pain gone, she routinely uses a tread climber and does fitness workouts.

Nicole no longer struggles going up and down steps to do laundry. She has no problem working 10-hour shifts in her current job as a pharmacy tech.

“My quality of life is so much better now,” says Nicole. “Everything is easier and a lot more fun. I don’t hurt anymore, and I have more stamina. I can stand on my feet all day — or dance all night — and I’m still good to go.”

But Nicole says the biggest rewards are getting back into “normal” size clothes and being able to sit in a restaurant booth.

“I took ownership of my life, and it’s the best decision I’ve ever made,” she says. “I wouldn’t change it for anything.”