Anatomy of the Larynx

Functions of the Larynx

The larynx functions in swallowing, breathing, and voice production. The production of voice can be thought of in terms of three components:

The lungs first supply adequate airflow to overcome the resistance of the closed vocal cords. The vocal cords are finely tuned neuromuscular units that adjust pitch, loudness, and tone by altering their position and tension. 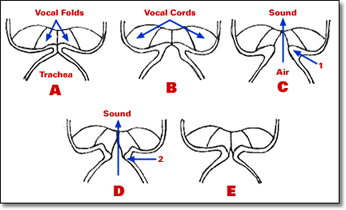 Final modification of the voice occurs in the mouth, nose, and throat, where the tongue, palate, cheek, and lips are involved in articulation (speech production).