Who Should Consider Adult Epilepsy Surgery?

Epilepsy is a disorder that results from surges in electrical signals inside the brain, causing recurring seizures.

Usually, medication can bring seizures under control. However, in one-third of people with epilepsy, seizures persist despite trials of numerous drugs.

If two different medications cannot help control your seizures, epilepsy surgery may be an effective option.

Determining if you're a candidate for epilepsy surgery

Before recommending surgery, neurosurgeons at the UPMC Movement Disorders and Epilepsy program must determine that:

Mapping brain function prior to surgery

Using state-of-the-art brain mapping imaging technology, UPMC neurosurgeons are able to determine the part of the brain responsible for seizures. After the area is found, neurosurgeons perform extensive testing to determine any major problems with speaking, understanding, or other abilities that could arise if that area of the brain is removed.

In some cases, neurosurgeons briefly interrupt the function of the part of the brain considered for surgical removal and ensure that you can still do all the things you can ordinarily do.

If surgery is appropriate for treating your epilepsy, UPMC neurosurgeons perform an array of effective surgical interventions

ROSA® is a new robotic technology that allows UPMC neurosurgeons to more accurately perform minimally invasive procedures for epilepsy and movement disorders.  The advanced ROSA computer system is able to generate 3-D images of the patient’s brain, giving surgeons the option to look at the images from any angle and at any depth. Similar to a “GPS” system, ROSA provides a detailed road map of the brain’s vital structures and helps mark the exact areas surgeons need to reach.

Once the initial planning is complete, surgeons use ROSA’s robotic arm as a guide to perform very precise surgery with very thin recording electrodes. Because of this, surgeons are able to access the brain though tiny drill holes, which is much less invasive than the traditional approach of removing a portion of the skull.

Using laser ablation, UPMC neurosurgeons are able to treat seizures caused by epilepsy using heat. During the procedure, a laser fiber, guided by MRI technology, is directed toward the source of a patient's seizures through a small hole in the skull. Once the targeted area has been defined, surgeons use heat from the laser to destroy abnormal brain tissue responsible for causing the seizures. The entire procedure is viewed in real time on MR images that display thermal maps outlining the distribution of heat to ensure safety and successful target treatment.

Using a combination of preoperative and intraoperative brain mapping, this procedure involves removing the area of the brain that is causing seizures. As the most common type of epilepsy surgery, people often experience a 50 to 90 percent success rate for complete seizure relief.

This procedure may also be effective for people who have epilepsy located in areas of the brain other than the temporal lobe, or for patients who have been told that their epilepsy is inoperable.

The vagus nerve serves as one of many highways of information for carrying messages to and from the brain. Because of its many connections to areas in the brain, the vagus nerve can be a key target for treating epileptic seizures. During the procedure, a thin wire (electrode) is wrapped around the vagus nerve on the left side of the neck. The electrode is connected to a pulse generator, which is implanted under the skin near the collarbone. The generator sends mild electrical impulses up the nerve at regular intervals, modifying the brain’s electrical activity, and resulting in seizure reduction.

Deep brain stimulation is a surgical procedure where two thin wires (electrodes) are implanted into the areas of the brain associated with the seizure network. The wires are connected to a pulse generator that is implanted under the skin near the collarbone. The generator sends mild electrical pulses through the wire to the brain at regular intervals, modifying the brain’s electrical activity, and resulting in seizure reduction.

During this procedure, a small device, called a neurostimulator, is surgically implanted in the skull. Wires, or leads, are connected to the neurostimulator and placed in areas of the brain that have been determined to be responsible for seizure activity.

After the procedure, the neurostimulator is turned on and begins to monitor the electrical activity of the brain. When the device detects abnormal activity that could lead to a seizure, an electrical current is sent through the leads to the brain to prevent seizures. The device is similar to a pacemaker, which detects abnormal heart rhythms and responds by delivering electrical stimulation to correct the problem.

How can we help you?

When this college student was diagnosed with epilepsy, surgery to remove a portion of his brain responsible for the seizures helped get back his life. 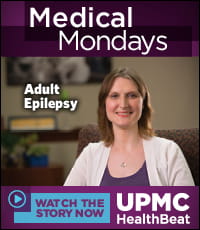