Located in Pittsburgh, PA, UPMC is among the world's largest and most comprehensive centers for robotic surgery. Our experts operate surgical robots at ten UPMC hospitals in the Pittsburgh region and throughout western Pennsylvania, and also perform advanced robotic surgery around the world.

Benefits of Robotic Surgery May Include: 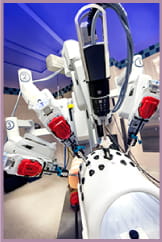 UPMC has more da Vinci surgical robots and dual-console systems than any other medical center in North America. Dual consoles allow a team of surgeons to operate simultaneously, and to foster a truly comprehensive and collaborative approach to surgical care.

The da Vinci Surgical System® features a 3D image-processing system, interactive mechanical arms with joints that follow movements of the surgeon's hands, and a camera arm that allows the surgeon to see a high-definition, magnified view of the procedure. In some cases, robotically assisted surgery allows our surgeons to perform surgery on tumors that are otherwise inoperable.

The Flex® Robotic System gives head and neck surgeons the ability to access anatomical locations that were previously difficult or impossible to reach during traditional minimally invasive surgery. Using advanced robotic surgery approaches, surgeons can steer around anatomical structures with magnified HD for views that may not be possible with other minimally invasive surgical approaches.

The Flex® Robotic System can navigate a nearly 180 degree path to reach challenging surgical targets. Surgeons can then deploy 3mm articulating instruments from a stable surgical platform that extends their reach to perform procedures. UPMC is the first center in the U.S. to utilize the Flex Robotic System since this robot technology received FDA approval in 2015. The advanced robotics device is approved for use only in head and neck surgery.

The state-of-the-art, flexible robot UPMC helped create is now being used by our surgeons to treat conditions that were once inoperable.

Read the story in the Post-Gazette.

At the UPMC Center for Robotic Head and Neck Surgery, our surgeons and experts are national and world leaders who develop new techniques using assistive robots to access hard-to-reach head and neck tumors. Many tumors can now be reached through the natural opening of the mouth using a technique called Transoral Robotic Surgery (TORS), eliminating the need for external incisions through the face and jaw.

At the UPMC Center for Robotic Head and Neck Surgery, our experts perform robotic thyroid surgery, which avoids a visible incision.

UPMC is one of the world's most experienced centers for robotic Whipple surgery for pancreatic cancer. Our team also has expertise in robotically assistive surgery for liver cancer, bile duct cancers and gallbladder disease.

UPMC urologists use robotic technology to perform complex kidney and adrenal surgery such as partial nephrectomy, often allowing the tumor to be removed while sparing kidney function.

At UPMC, robotic surgery has become a standard technique of urological surgery for conditions including prostate cancer and a variety of other pelvic disorders. 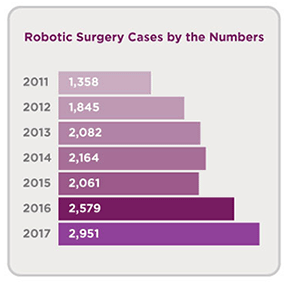