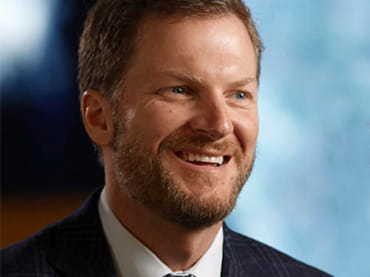 As a NASCAR driver, Dale Earnhardt Jr. is very familiar with the dangers and risks of his sport - estimating that he sustained about 20 concussions over his nearly 20-year career. In late 2012, he sustained a more notable concussion while on a practice run.

Dale says he was unable to gather his thoughts after this injury and felt:

It took Dale four weeks to feel like himself again.

He was feeling a bit better going into a big race in October. But horribly, he was involved in a 25-car pileup and sustained another concussion. What followed was a concussion producing symptoms like no other Dale had ever experienced.

After this injury, Dale started showing new symptoms, including:

"I felt like I was at a concussion mini camp. When I walked into UPMC, I knew that this is where I needed to be." — Dale

Deciding to get medical advice after many years of head injuries, Dale first went to see his Charlotte doctor about his symptoms. His doctor referred him to the UPMC Sports Medicine Concussion Program led by Micky Collins, PhD.

Dale made the trip to Pittsburgh and had tests to assess his injury.

After reviewing the results, Dr. Collins gave Dale a tailored treatment plan that included rehab exercises, as well as provided hope for his recovery.

At UPMC, Dale was also able to learn about the link between his two concussions and the persistence of his symptoms.

“I felt like I was at a concussion mini-camp. I was looking around the room and thinking, I felt so alone before that. I felt like I was this one individual in a city of hundreds of thousands, with this issue."

"When I walked into UPMC, I was like this is where I need to be. There are people getting treated, and they're putting a smile on people's faces. They're helping them understand what's going on," says Dale.

After weeks of hard work and support from Dr. Collins and team, Dale recovered and reported feeling better than ever.

“With the care I got at UPMC, I was able to return to my old self. The rehab and the things that they put me through got me back to doing what I love to do."

The Results: Winning the Daytona 500

Dale soon returned to the track. In fact, he won the Daytona 500 in February 2014 after completing his treatment at the UPMC Sports Medicine Concussion Program.

“I was very lucky that my injury was something I was able to recover from. And I felt like Pittsburgh really accelerated that. They gave me the ability to get better than I would have alone."

Dale would continue his NASCAR career until retiring on his own terms in 2017.