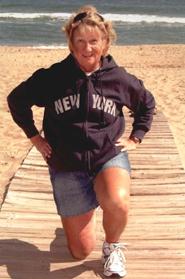 Barbara Fazenbaker’s decision to have hip replacement surgery was made better late than never. After 10 years of considering surgery, she had reached a point in her early 50s at which she was having great difficulty walking due to the pain in her hip.

Barbara was born with congenital hip dislocation, but she never realized it until later in life. Dismissing her slight limp due, at least in part, to getting older, she was used to ignoring much of the pain.

As her problem persisted, she tried conservative treatments like physical therapy, warm water tanks, and stretching machines. Although she gained more mobility, she knew that this was not the solution to her problem. Her therapist recommended Anthony M. DiGioia, MD, of Renaissance Orthopaedics and the Bone and Joint Center at UPMC Magee-Womens Hospital.

After making an appointment with Dr. DiGioia, Barbara decided to try a hip injection treatment to get an idea of what a hip replacement would feel like.

Although the hip injection did help her get through an active vacation in Las Vegas, she recalls that once she started walking, she had to keep going; if she sat too long, she’d get “frozen hips.”

Six months later she scheduled her surgery. She was comforted to find that Dr. DiGioia and the Bone and Joint Care Team were very knowledgeable and able to answer all of the questions she had about the surgical process.

After leaving the hospital, Barbara chose to use a walker for the first week, because she was hesitant to use a cane for fear that she would begin favoring one side, as she had done before her surgery. She quickly graduated from the walker, and during the next three weeks, she used a cane only occasionally.

Barbara diligently went to her physical therapy sessions and made sure to do two sets of her exercises at home on the other days.

Since her surgery, Barbara:

“What a difference it makes when you can get around well and without any pain,” she says. “I never realized how much I could do and all the fun things I had been missing out on. I had definitely let the problems with my hip go on too long!

“I would have never achieved my end result, had it not been for Dr. DiGioia and his team,” she says. “I strongly recommend them for anyone considering surgery. I will be forever grateful!”