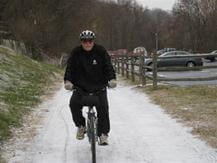 James Duke had always been an active walker and golfer. As he got older, however, he noticed that instead of having the strength to walk his usual five miles, he was struggling to walk just a quarter of a mile. On the golf course he had to start riding a cart to play nine holes, instead of walking the course.

In 2008, at the age of 61, James was struggling not to give up his activities. When he was referred to Anthony M. DiGioia, MD, of Renaissance Orthopaedics and the Bone and Joint Center at Magee-Womens Hospital of UPMC, he called right away to make an appointment.

“From the very first appointment, through the entire surgery and recovery process, Dr. DiGioia and his team were so supportive and knowledgeable,” he says. “Through the entire experience, they gave me confidence that I had made the right choice.”

With the help of the rapid rehab program and a great care team, James went home from the hospital in a few days after his surgery, walking with only a cane.

James did everything he could to help himself recover, such as exercising before and after surgery, attending physical therapy appointments, completing assigned exercises, and being an active participant in the pain management program.

“You only get out of it what you put into it,” he says.

Dr. DiGioia and his team were always available to answer questions for James throughout the process. Never having to wait long for a return call after leaving a message, James was impressed with the commitment to follow-up to see how he was doing.

“I have absolutely no problems with my new knee,” he says.

James recommends these tips to those who are considering orthopaedic surgery: