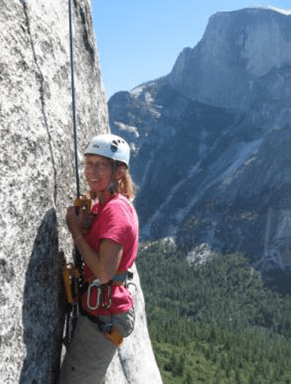 Lisa Anderson considers Yosemite, Calif., her second home. For the past 15 years, she has spent two weeks of each year climbing and hiking in Yosemite with her husband, Irving, and their son, Dan.

To prepare for these trips, Lisa and her husband trained by climbing the stairs at the University of Pittsburgh’s Cathedral of Learning. Three times a week, the pair would make two ascents of the stairs while carrying several two-liter bottles of water in their backpacks.

Like many people, Lisa thought the constant pain in her right leg and groin were signs of her getting older. One night in 2007, following a double ascent of stairs, Lisa was bedridden from an onset of pain. Assuming she pulled a muscle, she went to her doctor and was shocked when he diagnosed her with congenital hip dysplasia and recommended that she consider total hip replacement surgery.

Surprised by the news, Lisa went to Anthony M. DiGioia, MD, of Renaissance Orthopaedics and the Bone and Joint Center at Magee-Womens Hospital of UPMC, for a second opinion. After Dr. DiGioia confirmed the findings, Lisa received an injection to ease her pain temporarily. It worked for about six weeks. Her limping became more pronounced, and the pain in her back increased. Even driving her car with a stick shift became a challenge because she couldn’t lift her leg to shift. Lisa wanted a more permanent solution.

When she was invited on a five-week group trip to Vietnam, Laos, and Cambodia, with several months to prepare, Lisa decided to have her hip replaced before the trip so she wouldn’t slow the group down.

Prior experiences with anesthesia had left Lisa with a 10-day headache, and contributed to her anxiety for the upcoming surgery. She was worried that even though she would likely not feel anything during surgery, she might still hear and remember the surgery.

Lisa learned about the pain management team at Magee and was relieved to learn about these approaches. The only memory she has of the experience is being moved onto the operating table, and waking up after surgery.

“I couldn’t have asked for a more perfect experience,” she says. “The pre-op, operating room, recovery room, and floor staff were all absolutely wonderful and took great care of me and also my husband.”

Used to being independent, Lisa knew she would have to be strict about attending physical therapy if she wanted to participate in her upcoming trip. She began physical therapy the afternoon following her surgery, and was able to return home the next day after only two physical therapy sessions.

Those close to her made Lisa’s recovery time fun and bearable. “Friends made a constant stream to our door bearing gifts,” she says. “Our freezer had never been so full.”

As Lisa worked hard to prepare for her trip to Vietnam, she made frequent trips to the physical therapist’s office. Her husband or friends escorted her there and went out for coffee with her afterward to keep her spirits up.

Four months after her hip replacement, Lisa was hiking in the hills of northern Vietnam, walking up stairs to fourth-floor hotel rooms, climbing in and out of boats on the Mekong River, kayaking in Halong Bay, and watching the Tet fireworks celebration from her hotel rooftop in Saigon.

Upon returning home, Irving and Lisa began planning their annual Yosemite trip for August. “I wasn’t sure what I could or couldn’t do in terms of climbing, but I knew hiking would be fine.”

Once in Yosemite, Lisa tried a short but challenging practice climb. Despite a few bruises, everything went smoothly, and she decided to tackle a longer route with her son.

At times the path was blocked by rocks and fallen trees, but Lisa overcame the obstacles. “I didn’t even think about my hip,” she said.

Lisa knew she was now ready to climb on.