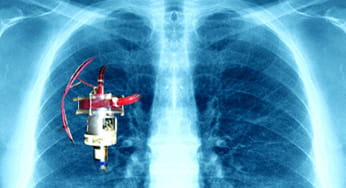 The McGowan Institute for Regenerative Medicine is working on several devices that oxygenate blood before it arrives in the lungs. While mechanical ventilators can assist patients with breathing for short periods of time, they sometimes cause lung damage. In addition, they're not particularly portable.

Under the direction of McGowan Institute for Regenerative Medicine faculty member William Federspiel, PhD, the Medical Devices Laboratory is developing clinically significant devices for the treatment of pulmonary and cardiovascular ailments by utilizing engineering principles of fluid flow and mass transfer. Advancement of novel respiratory support devices is being conducted for the treatment of acute and acute-on-chronic lung failure. Also, medical devices utilizing membrane and particle based adsorption technologies for the removal of targeted solutes from whole blood is an ongoing effort which will aid in the treatment of pathogenic reactions.

Learn more about the University of Pittsburgh's Medical Devices Lab.

Examples of on-going respiratory assistance research projects within the Medical Devices Laboratory include:

As these technologies mature, they will be available to physicians to assist in advanced lung care cases.

Chronic respiratory diseases (CRDs) are diseases of the airways and other structures of the lung. Some of the most common are chronic obstructive pulmonary disease (COPD), asthma, occupational lung diseases, and pulmonary hypertension. In addition to tobacco smoke, other risk factors include air pollution, occupational chemicals and dusts, and frequent lower respiratory infections during childhood. CRDs are not curable, however, various forms of treatment that help dilate major air passages and improve shortness of breath can help control symptoms and increase the quality of life for people with the disease. As noted by the World Health Organization:

For clinically available therapies, please follow the link below.

How Do I Get Treatment?