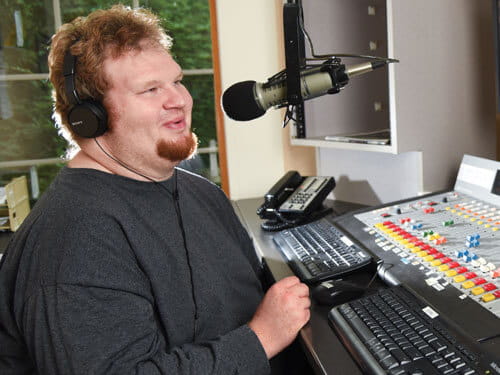 David Troxell III knew he had to do something about his weight. At more than 600 pounds, walking to the bathroom left him breathless.

After bariatric surgery at UPMC Altoona in March 2016, he’s healthier, happier, and eager to tell his story.

Dave's Story: Life Gets Harder at Over 600 Pounds

“I’ve always been a big guy, but I carried my weight well,” says Dave.

But when his weight reached over 600 pounds, it was hard to walk, and his daily life became more and more taxing.

Always an outgoing, fun-loving guy, Dave would only leave his home for work or to do basic chores.

“I had to use one of those electric carts to do my grocery shopping,” he recalls.

An on-air personality and program director at radio station Hot 100 in Altoona, Dave is somewhat of a local celebrity.

“Even though people can’t see me, they recognize my voice,” says the 35-year-old Altoona native. “If my story helps others see the positive results someone like me had with bariatric surgery, I'm happy to share it.”

Time to Make a Major Change

A self-described food addict, Dave tried many diets. But he always regained the weight, and more.

It took a health scare and hospital stay in 2015 for him to get serious about losing weight.

“My dad had a massive heart attack. So, having chest pains — along with high cholesterol and high blood pressure — worried me,” says Dave.

But it was the diabetes diagnosis that spurred him into action.

“I knew too many diabetics with serious health issues, including limb amputations,” he says. “I did this for myself — to get my life and my health back — but I also did it for my dad.”

A friend’s experience with weight loss surgery inspired Dave to find out if it was right for him.

In February 2016, Dave walked into the office of Matthew Newlin, MD, a surgeon with UPMC Altoona's Bariatric Surgery Program. He weighed 596 pounds.

Getting His Life Back

Since his surgery on March 8, 2016, Dave has since lost more than 235 pounds. And he keeps losing weight.

Other rewards after his weight loss surgery:

Dave gets great joy knowing that he can now do things many of us don’t think twice about like:

“Before surgery, I could only drive a 2-door car because I couldn’t fit behind the steering wheel in a 4-door,” he says.

“Dr. Newlin saved my life,” says Dave. “Everyone at the UPMC Altoona Bariatric Surgery Program — the nurses, my dietitian, the whole staff — was great. And they continue to be very supportive. I still have a way to go on my weight loss journey, but I don’t ever want to go back. My health is too important.”

To learn more about bariatric services at UPMC Altoona, call 814-889-7500 or email BariatricCoordinator@upmc.edu.