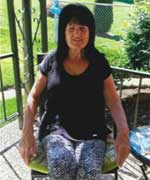 Pittsburgh native Grace Filice was first diagnosed with major depression while hospitalized at UPMC Western Psychiatric Hospital in 1999. Initially, her doctors prescribed several different antidepressant medications. But when the medication failed to control her depression, they suggested electroconvulsive therapy (ECT). She underwent a series of nine ECT treatments during her hospitalization there in December 1999.

After completing the ECT sessions, Grace's depression began to fade. Following her discharge from UPMC Western Psychiatric, she began outpatient treatment at the Comprehensive Recovery Services Clinic, where she continued with counseling sessions and attended classes and activities with other patients experiencing depression.

For nearly 20 years, Grace successfully managed her depression with antidepressants and ongoing counseling and group sessions at the outpatient clinic. But when her depression symptoms returned and medication no longer seemed to help, she decided to undergo another series of 11 ECT treatment sessions in 2019.

"ECT works well on me, and this time was as good as the last, if not better,” says Grace. “The staff is so thorough before each session. They ask about your progress, how you're feeling, and if there are any side effects. I had a great experience.”

For those dealing with depression or considering ECT, Grace says, "tell them how bad my symptoms were and how good the outcome was after ECT.

“The anticipation of the unknown can be difficult, but you’re in good hands with the doctors and nurses at UPMC Western Psychiatric. They know what they are doing."

For more information or to schedule an appointment with the Center for Interventional Psychiatry, please call 412-246-5063.